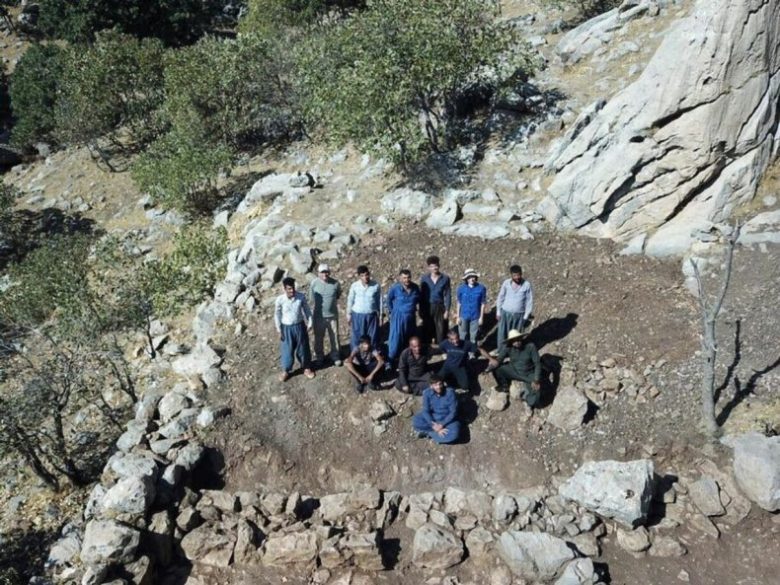 A mystery old fort that was previously only known from a few ancient coins may have been discovered in northern Iraq. Archaeologist Michael Brown of Germany’s Heidelberg University and colleagues believe they have discovered Natounia, a more than 2,000-year-old military and religious complex in the Zagros Mountains.

On what was formerly the frontier of ancient Adiabene, two towns, a stone castle, and other structures known as Rabana-Merquly, were discovered. Adiabene’s kingdom paid homage to the Parthian Empire, which ruled Iran for over 1,000 years until 224 A.D. and was a significant political force in the country.

Brown wrote in an email to Zenger, “The twin rock-reliefs at the two entrances to the settlement appear to depict an anonymous King of Adiabene, based on the dress of the figure, in particular his hat.” Adding that he is “pretty sure” that the fortress was built by Adiabene’s ruling dynasty.

According to Newsweek‘s report, around 140 miles distant, in the ancient city of Hatra, a carving similar to this one was discovered in a rock. The inscription on the uncommon coins from Natounia that have been discovered elsewhere in the Near East is what gives the city a more definite association.

“An epithet on the coins locates it ‘on the Kapros,’which we know is the modern Lower Zab river,” Brown wrote.

Natounia is only known for its rare coins; there are no historical references that provide details. Brown commented, “Rabana-Merquly is by far the largest and most impressive site of the Parthian era in that region, and the only one with royal iconography, so it’s by far the best candidate,”

“The complicating factor is that the site is located on a major tributary of the Lower Zab and not the main channel, this is unusual but not unique in ancient toponyms of this type,” he added.

The seven known ancient coins mention a king named Natounissar and a place on the Lower Zab River. “We know from coins that the city was founded by the king—the king’s name as a toponym. The other significant link to Natounissar, which loosely translates as ‘servant of Ishtar,’ is a Hatra statue of an Adiabenean king named Attalos, it is by far the most similar to the Rabana-Merquly reliefs.”

“On the base of the Hatrean stature is an inscription which identifies Attalos as a grandson or descendent at Natounissar,” Brown wrote.

Brown believes that while Rabana-Merquly is not the only plausible location for Natounia, the coins provide indirect proof that the ancient city exists there.

Brown said in an interview with Zenger News, “Regardless of its exact identification, Rabana-Merquly was undoubtedly a major regional center on the edge of the Zagros Mountains—the fortress shows us the practicalities of territorial control in hinterland regions of empire, where state authorities interacted with semi-autonomous and often restive highland pastoralist populations.”

“The most exciting aspect of the site is definitely the natural setting. Rabana-Merquly is located on the western side of Mt. Piramagrun, one of the most spectacular mountains in the Zagros range, the western side of which runs through Iraqi Kurdistan”

“Its fortifications enclose naturally defensible terrain, and can be viewed as an extension of the surrounding highland landscape. If you’re familiar with Lord of the Rings, it’s basically a real-life Helms Deep,” he continued, referring to the fictitious stronghold that J.R.R. Tolkien had depicted.

Brown didn’t mention any potential lost wealth that might have been buried there. “The number of artifacts found at the site is actually relatively small, we think because the duration of the main Parthian era occupation was probably no more than 100 years. This interpretation is based on the lack of any significant architectural renovations over most of the site.”

In 2009, Iraqi archaeologists discovered pottery at the site, but Brown’s campaign discovered iron arrowheads and pins from the later Islamic period.

Brown intends to continue digging at Rabana-Merquly, revealing that drone mapping has discovered numerous other intriguing buildings across the complex. “A research priority for us is to try and understand the function of large fortified centers beyond defense”

“At Rabana, the presence of a probable sanctuary complex suggests it may have also been a place of pilgrimage, in addition to acting as a refugium for surrounding communities,”

“Large fortified centers such as Rabana-Merquly likely fulfilled a variety of economic and diplomatic roles in relation to their hinterlands. A similar mix of activity is apparent at the broadly contemporary site of Qal ͗eh-i Yazdigird on the opposite side of the mountains in Kermanshah province, Iran where a sanctuary, palace, and defensive architecture have been recorded,” We look forward to new discoveries.