For the first time, an 8,600-year-old flute was displayed 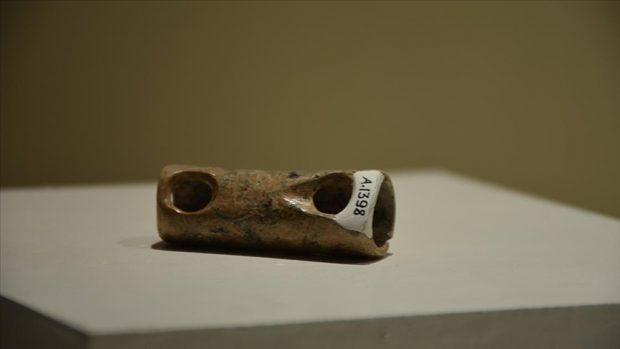 A program was organized by the Bilecik Museum Directorate on the occasion of the 18 May International Museum Day. This flute and other finds unearthed in the Bahçelievler and Gedikkaya excavations in Bilecik are open to visitors.

The celebration program at Bilecik Museum started with a moment of silence and the National Anthem, followed by the speech of Bilecik Museum Director Harun Küçükaydın.

After the folk dance performance of Ertuğrul Gazi Primary School students, the opening of the area where the finds unearthed in the Bahçelievler and Gedikkaya Cave excavations were exhibited.

Stating to reporters that there are 4 museums in the city and that new steps have been taken in terms of museology in Bilecik, Kızılkaya said, “The finds dating back to 14,500 BC in the Gedikkaya Cave in our Inhisar district and the very important artifacts unearthed during the rescue excavation in the Bahçelievler District campus in the city center, Bilecik. It has started to be exhibited in our museum.” he said.

Küçükaydın said that the first architectural structures in Western Anatolia were found in this region.

And he said “Oval structures emerged. Again in this region, we found a skeleton dating back to about 9,000 years. A flute dating back 8,600 years was found. These studies were also carried out by TUBITAK scientifically. Thus, we confirmed that the artifacts date back to 9,000 years BC. “We saw that people were engaged in animal husbandry in this region, the first settlement was started, and people lived in houses and continued their daily lives in various ways in the courtyard. At the same time, it was revealed that they buried their skeletons in these courtyards. 12 skeletons were found in these excavations.”

He emphasized that the oldest layer in the region belongs to 7 thousand years BC. Küçükaydın said, “We saw that there was an uninterrupted settlement for 1000 years. Then there was an interruption. About 5 thousand years later, we came across a wall in the Hellenistic Period. We found the fibula and a safety pin as a supporting find. We realized that this place was used for the second time in the Hellenistic Period, as well. “

BŞÜ Faculty of Arts and Sciences Archeology Department Lecturer Assoc. Dr. Deniz Sarı also noted that according to the Carbon 14 analysis, the earliest finds obtained during the studies in Gedikkaya Cave belonged to 16,500 years ago.