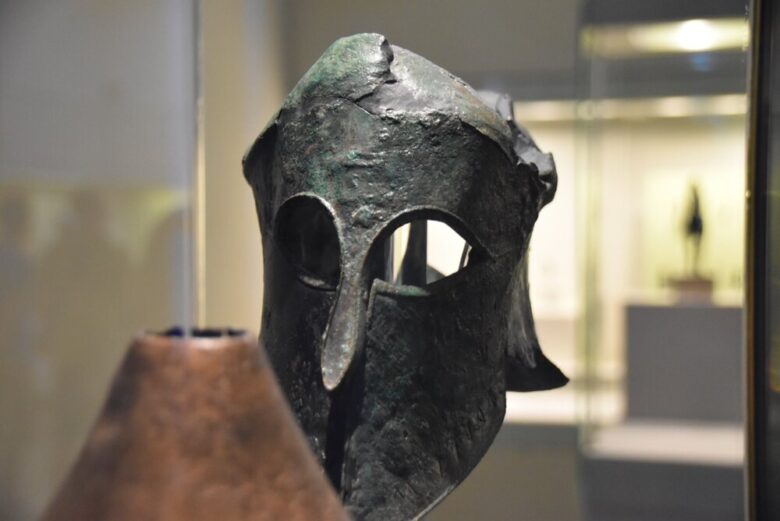 One of the most significant archeological finds in the history of the globe is the discovery of Miltiades’ helmet, who fought at the Battle of Marathon which was discovered in the late nineteenth century.

One of the most significant individuals in Greek history, Miltiades led the Athenians’ army in the historic Battle of Marathon against the Persians.

The exceptionally well-preserved item, which may tell tales that couldn’t even be encapsulated in hundreds of volumes, commands the respect of visitors to the Archaeological Museum of Olympia.

The magnificent helmet was found among the wreckage of Olympia’s Temple of Zeus. The Corinthian-style helmet is still largely intact after 2,500 years, but its dome is gone.

The helmet was allegedly discovered in the temple for one of two reasons, according to historians. Zeus was either sought after by the great warrior for help in a forthcoming conflict, or the sacrifice was made to honor Zeus for a victory.

If the latter is accurate, and Miltiades sought to thank Zeus for defeating the Persians in the Battle of Marathon, the finding of his helmet is even more significant, and the valuable artifact itself even more awe-inspiring.

Some historians and archaeologists do indeed think that Miltiades offered Zeus the helmet after he returned triumphant from Marathon, saving the great city-state of Athens from the Persians, based on the writings of Plutarch and Herodotus. Naturally, this preserved the path of history and western civilization as we know it today.

The Battle of Marathon

As the son of Cimon Colelamos, a renowned Olympic chariot racer who won three Olympic Games, Miltiades (550–489 BC) was born an aristocrat. He acquired a wonderful education, which made him not only a skilled politician but also a fantastic general.

He demonstrated his strength and tenacity by executing the Persian heralds who had come to seek the city’s surrender after he became the ruler of Athens. He did this in order to defend the city against Persian control. Miltiades then led his outnumbered army out of the city and defeated the Persians at Marathon. In 490 BC, the two armies met on the Plain of Marathon, which is situated about 42 km (26 miles) north of Athens.

The Battle of Marathon is one of the most well-known historical battles in the entire globe. Based on the writings of ancient historians like Plutarch and Herodotus, it has inspired many legends and stories over the centuries.

Knowing that a siege would be terrible, Miltiades had the brilliant idea to battle the Persians outside of the city. He positioned his men with a cunning plan to inflict a crushing blow to the Persians, forcing them to retreat.

From the writings of Herodotus, modern historians assume that he must have spoken to old veterans who had known and fought under Miltiades, as he reported several details of the battle.

What stands out the most, perhaps, is a speech Miltiades gave to Callimachus, a general in the Athenian army.

According to the news of Greek Reporter, some generals who wished to fight the Persian army in Athens rather than Marathon must have changed their minds after hearing the motivational speech, which appears genuine based on eyewitness testimony. The speech, as seen below, is also believed to have boosted the spirits of the valiant and disciplined hoplites during the battle:

“With you it rests, Callimachus, either to bring Athens to slavery, or, by securing her freedom, to be remembered by all future generations. For never since the time that the Athenians became a people were they in so great a danger as now.

If they bow their necks beneath the yoke of the Persians, the woes which they will have to suffer…are already determined. If, on the other hand, they fight and overcome, Athens may rise to be the very first city in Greece. We generals are ten in number, and our votes are divided: half of us wish to engage, half to avoid a combat.

Now, if we do not fight, I look to see a great disturbance at Athens which will shake men’s resolutions, and then I fear they will submit themselves. But, if we fight the battle before any unsoundness shows itself among our citizens…we are well able to overcome the enemy. On you therefore we depend in this matter, which lies wholly in your own power.

You have only to add your vote to my side and your country will be free—and not free only, but the first state in Greece. Or, if you prefer to give your vote to them who would decline the combat, then the reverse will follow.”

Miltiades intended to safeguard the greatness of the democratic city-state of Athens for future generations. He may not be as well-known as Pericles, but he made a priceless contribution to ancient Greece and, by extension, western civilization.

The Greek victory in these conflicts can be considered as having started at Marathon. The Battle of Marathon was a turning point in the Greco-Persian Wars, proving to the Greeks that they could defeat the Persians. As Sparta was regarded as Greece’s primary military power, the fight also demonstrated to the Greeks their ability to defeat foes without the aid of Spartans. The ensuing two hundred years witnessed the birth of the Classical Greek civilisation, which has remained enduringly influential in Western society, and as a result, the Battle of Marathon is commonly seen as a watershed moment in Mediterranean and European history, and is widely celebrated today.