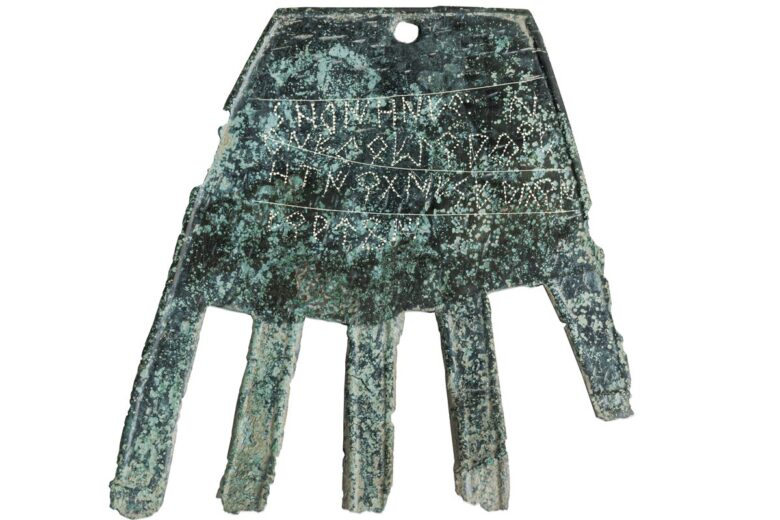 The Hand of Irulegi was initially discovered in 2021 by archaeologists from the Aranzadi Science Society who were excavating an ancient hamlet at the foot of Castillo de IRULEGIko gaztelua near Pamplona, Spain.

The artefact was made in the first century BC during the Roman Sertoria Wars (80–72 BC), a time of conflict between a party of Roman rebels (Sertorians) and the Roman government (Sullans).

Archaeologists claim that the hand was placed above a door as protection, but the village was later torched and abandoned, and the hand was left buried in a mud-brick home’s ruins.

The Vascones, a pre-Roman tribe whose territory stretched between the upper stream of the Ebro River and the southern basin of the western Pyrenees, are thought to have constructed the hand.

It was once believed that the Vascones had no formal written language (apart from a few words) and that they only began recording their speech after the Romans introduced Latin.

According to the news of Heritage Daily, it has been determined through a new analysis of the Hand of Irulegi that it contains the earliest text in the Basque language, written in Iberian script, and that it contains five Vasconic words spread across 40 characters. This discovery challenges much of what was previously thought to be known about the Vascones.

The first term is sorioneku, which is similar to the word “good fortune” in modern Basque, “zorioneko.” The term is followed by four other words whose meanings are less clear. The transliteration of the text is:

The University of the Basque Country’s Joaqun Gorrochategui, a professor of Indo-European philology, stated: “This piece turns upside down what we thought about the Basques and writing. We were almost convinced that the Basques were illiterate in ancient times and did not use writing, nothing more than to mint some coin”.