Greek rock inscriptions found on a mountain in Central Asia 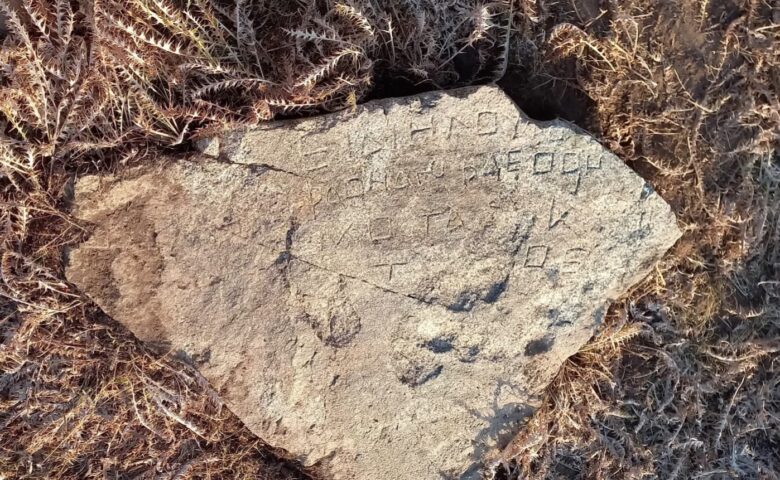 Tajikistan, a nation in Central Asia, has found ancient Greek alphabet inscriptions on a rock on a mountain.

According to Nicholas Sims-Williams, a renowned expert in the study of the Bactrian language, the engravings in the Bactrian region of that location say, “ΕΙΔΙΗΛΟ Υ…ϸΑΟΝΑΝϸΑΕ ΟΟΗ-ΜΟ ΤΑΚ-ΤΟΕ” which translates to “This is the… of the king of kings, Vima Tactu.”

Due to its diverse natural environments, Tajikistan seldom offers archaeologists the chance to find new monuments. Monuments in remote highland places are extremely challenging to locate. However, locals complete the task and inform archaeologists of their discoveries.

For instance, on Mount Mug in 1932, a local shepherd by the name of Jura Ali stumbled upon a basket containing papers. The discovery proved to be special since it was the first text written in the Sogdian language to be discovered on the grounds of ancient Sogd. The old Penjikent village was ultimately discovered as a result of that research.

In the highlands, a resident of the village of Shol in the Hisor Sanginov area discovered inscriptions written in an unknown letter. The investigation of the find was taken over by Bobomullo Bobomulloev, a researcher at the Institute of History, Archaeology, and Ethnography of the National Academy of Sciences of Tajikistan.

The rock inscriptions were discovered to be written in ancient script after further examination. They were situated in a really beautiful area known to the local populace as Khoja Mafraj, in the northernmost section of the valley next to the right tributary of the Almosi River.

According to the news of Greek Reporter, the inscriptions discovery was made by a local shepherd named Sanginov Khaitali, who said that the first time he had been there, he had discovered much more. Fragments containing writing fell to the bottom of the cliff as a result of avalanches. The portion that has remained has 23 letters cut in three lines on a flat piece of granite.

Between the Oxus River, now known as the Amu Darya River, and the Hindu Kush Mountain range in Central Asia, is the ancient and historically significant area known as Bactria. The area is also known as “Balkh,” after one of the Amu Darya’s tributaries.

Although historically it has been an one territory, it is presently divided among many countries in Central Asia, including Pakistan, Afghanistan, Turkmenistan, Uzbekistan, and Tajikistan. Today, Samarkand (in Uzbekistan) and Kunduz are two of its most significant cities (in northern Afghanistan).

Ancient Greek reports of archaeological findings suggest that assembled empires have lived in the region east of Persia and northwest of India from 2,500 BCE.

Bactria was conquered and incorporated into the Persian Empire by Cyrus the Great in the sixth century BCE. Bactria was in disarray after Darius III was defeated by Alexander the Great at the Battle of Gaugamela (Arbela) in 331 BCE. It took the Greek army two years to put an end to the Bactrian uprising because of fierce local opposition, although their control was at best precarious.

Greeks and their culture were brought to places distant from the Mediterranean by Alexander the Great.

Greater diversity, cultural alterations, and integration were all brought about by the entrance of Greeks in western and central Asia during the Hellenistic Period (323–31 BCE).

Bactria, a remote area that served as the home to the distinctive Greco-Bactrian Kingdom, is located on the eastern side.

According to the Greek historian Herodotus, the Persian King Darius subjugated the city’s populace to slavery and “gave them a town of Bactria to reside in” after besieging the Greek colony of Barca in Cyrenaica for nine months during the Greco-Persian Wars (499–449 BCE).

Even yet, the Greek presence in the area did not really take off until Alexander’s conquest. It became the easternmost region of the Seleucid Empire following his death, which bore the name of the Greco-Macedonian dynasty that ruled the majority of the Middle East throughout the Hellenistic era.