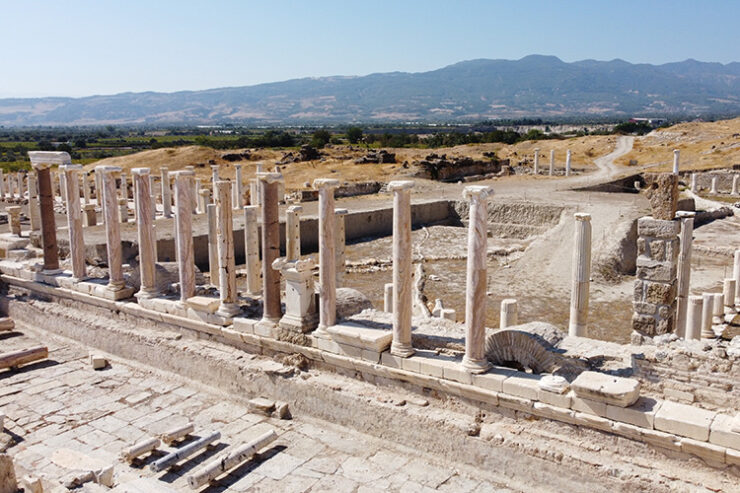 In the excavations of the ancient city of Tripolis in Denizli, a 1500 year old stone cutting workshop, metal saw parts and an inscription containing orders were found.

In the ancient city, which was founded on the banks of the Büyük Menderes River, 44 kilometers from the city center, the excavation and restoration works started in 2012 are carried out by Pamukkale University Archeology Department Faculty Member Prof. Dr. Bahadır Duman.

The stone cutting workshop, which is estimated to be 1500 years old, was reached during the ongoing excavations this year. Remains of hacksaws were found in the workshop, pieces of marble cut there and inscriptions on which orders were written. Excavations continue with a team of about 40 people.

Head of Excavation Prof. Dr. Bahadır Duman told to AA, that they uncovered important findings from the past of the ancient city. “We had worked in the north-south direction before. We identified a stone cutting workshop in the same area this year. The workshop has a rectangular plan on an area of approximately 35-40 square meters and has survived to the present day with all its walls intact. The system in the stone workshop works by taking water from the adjacent water tank. The system actually works with a water wheel with a diameter of 2.5 meters. The saw moves with the energy produced by the wheel. It cuts the stones. We can say that it produces about 1 kilowatt of energy.”

The workshop continued production until 650 AD, where the stones brought from the structures belonging to the imperial period were transformed into triangular, hexagonal, octagonal styles in smaller sizes. It is thought that the banded travertine and marble stones prepared in Tripolis were also sent to the nearby cities of the region.

“Especially the banded travertine type stone was sent to the surrounding cities since the 2nd century AD. Similar ateliers exist in different regions of the Mediterranean basin. There is a finds center from the 5th and 6th centuries AD in Jordan. The second is a workshop in Ephesus that works with a similar system. This Tripolis workshop thirdly, it has entered the literature. However, we can say that we have more details in terms of finds. In other words, we identified many elements and equipment of the wooden wheel system during these excavations. We have especially a part of the saw for cutting stones. Also, various orders from this workshop were engraved on the stones. And I can say that in the earthquake that took place in the middle of the 7th century, the wooden part of this workshop burned down and it became carbonized.”

We already know that the Ancient City of Tripolis is a 1st degree earthquake zone. Even, earthquake resistant stones were preferred in structures. It has been determined that various reinforcing materials are used in public buildings with more than one floor. However, Tripolis has not been abandoned because of its temperate climate and agriculturally important region. Instead of abandoning, they preferred to fight the earthquake. From the inscriptions and ruins, it is thought that the city was exposed to 4 major earthquakes.

The destruction caused by earthquakes in ancient times is seen both in public buildings and in civil architecture where the people live. During the excavations, it was proved in the rooms of some houses, animals and people were together under the walls during the earthquake. However, despite the earthquakes, life continued here. In a way, we can say that the people of Tripolis have learned to live with the earthquake.