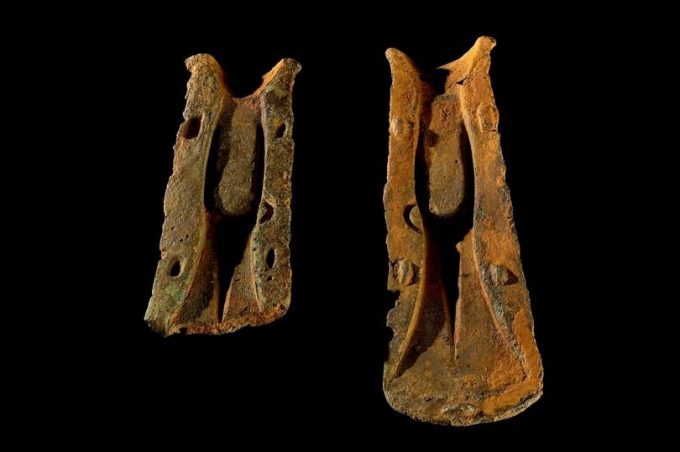 After being discovered in North Wales over five years ago, a pair of unique relics dating back about 3,400 years to the Middle Bronze Age artifacts have been designated treasure. During the Bronze Age, the two bronze mould valves were used to produce palstaves (a kind of axe).

On August 12, 2017, George Borrill, of Llandudno Junction, spotted Bronze Age artifacts while metal-detecting on rugged pastureland near Conwy. Only 17 similar molds have been discovered in the UK prior to Mr Borrill’s discovery.

The moulds are about eight inches in length and feature a single midrib decoration with a side-loop. The two mould valves, which date back to 1400-1275 BCE, once formed a matching pair, the two locking together – one a positive valve with projecting tenons and the other the negative valve with matching recesses.

Raised rib and moulding embellishment adorn the outside surfaces, each with a slightly different pattern. Amgueddfa Cymru – National Museum Wales Principal Curator for Prehistory Adam Gwilt said: “This is a significant new archaeological find for Wales.

“Moulds such as these are quite rare across Britain. They offer us great insights into the bronze casting traditions operating in North Wales during the Middle Bronze Age.

“The growing evidence for moulds and palstave hoard finds in this area suggests that a range of bronze palstaves with midrib decorations were made here and were then exchanged and transported over long distances at this time, to their place of use. It is likely that the nearby Great Orme Bronze Age copper mines, some of the most important prehistoric mines in Europe and in their heyday during the Middle Bronze Age, provided the local source of copper for bronzesmiths.

“Tin from Cornwall was accessed, to mix with the molten copper to form these bronze artefacts. This matching pair of moulds appears to have been deliberately buried, rather than being recycled at the end of their lives, perhaps during a symbolic act of returning these powerful objects to their place of origin.”