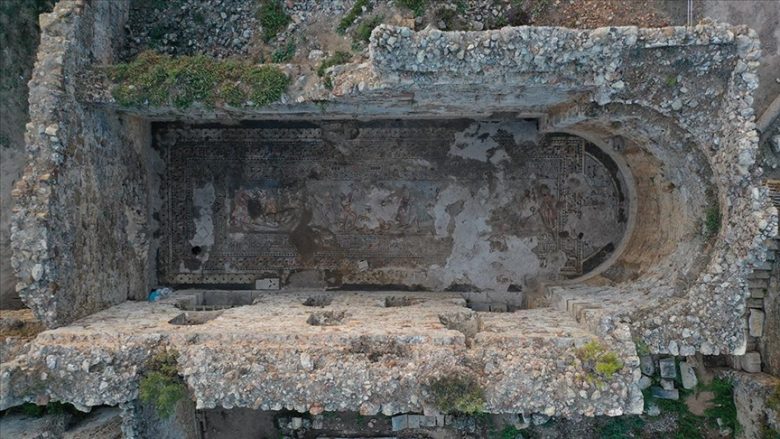 An approximately 164-square-meter (1,765-square-foot) floor mosaic depicting the ancient Greek legendary hero Heracles, known as Hercules in Roman mythology, was discovered during excavations at the ancient city of Syedra in the Alanya area of southern Antalya.

Karamanoğlu Mehmetbey University Faculty of Letters, Archeology Department Lecturer and Syedra Ancient City Excavation Committee Head Assoc. Dr. Ertuğ Ergürer told AA that they have reached very good archaeological data in the works they have been carrying out in the historical field since 2019. He stated that they came across a very special piece of art in three years.

“We thought it was unhealthy to fully reveal the mosaic, which we first identified in 2019. After the necessary preparations, we started to unearth our mosaic on ‘Heracles’ fully towards the end of 2020. The mythological scenes in the mosaics called ‘The 12 works of Heracles’ were well preserved. We’ve seen it protected.”

Ergürer stated that the mosaic was completely covered with soil in order to preserve it and to obtain better results in future detailed studies.

He stated that they deemed it appropriate to share with the public that the mosaic was found after the necessary protection measures were taken, and work continues to unearth the mosaic and other artifacts in the area.

There is no other example of the historical artifact unearthed in the great Roman bath in the ancient city.

Assoc. Dr. Ertuğ Ergürer said that the floor mosaic, which is 7.9 meters in width and 21.91 meters in length, is considered to have been made in the 2nd century AD and spreads over an area of ​​approximately 164 square meters.

‘The 12 missions of Heracles’ is a mythological subject that is worked on many well-known vases, artifacts and sarcophagi in ancient times.

“The mythological hero, known as Heracles in Greek mythology and Hercules in Roman mythology, is given 12 very difficult tasks. He is asked to fulfill these tasks. His first task is to kill the ‘Nemean Lion’, which has a skin that does not penetrate with the sword and spear. Here he strangles him. The fight with various mythological characters and figures is staged. In the last scene, there is a scene where the Hesperids take the apple and rest. Some scenes were destroyed in antiquity, and some scenes are quite well preserved.”

Ergürer also said that they are still at the beginning of work at Syedra. Apart from this, he noted that the population of the city could have been around 5-6 thousand during the period of mosaics.