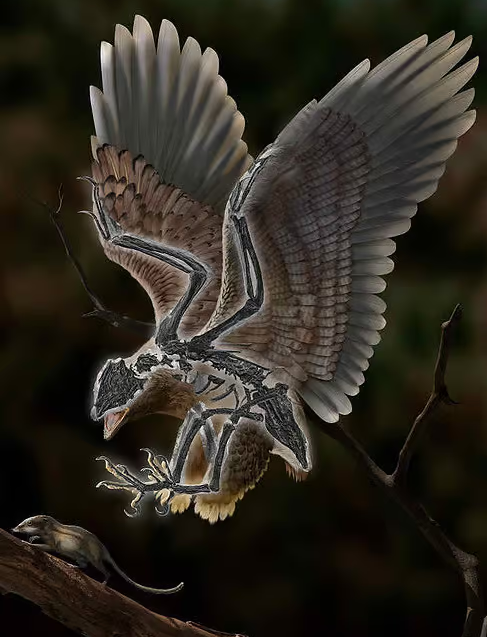 Although we are aware that current bird are descended from dinosaurs like the T. rex, when and how did this happen? The Chinese fossil from 120 million years ago sheds light on the evolution of current birds.

In terms of shape, functioning, and ecology, this transition is one of the most notable, but palaeontologists are still unable to fully understand how modern birds developed.

A recent fossil find of a dinosaur bird progenitor in China by a team from the Institute of Vertebrate Paleontology and Paleoanthropology (IVPP) of the Chinese Academy of Sciences may add another piece to this puzzle.

The 120 million year old fossil, Cratonavis zhui, has a skull that resembles a dinosaur and a body that resembles a modern bird. It also stands out from other birds, especially extinct species, due to its extremely long scapula and first metatarsal bones.

High resolution CT scans were used to analyze the skull before the fossil was digitally removed from the surrounding rock to reveal its original form. According to the article published in Cosmos, the skull of Cratonavis is not avian-like. Its morphology is quite similar to that of dinosaurs like Tyrannosaurus rex.

According to the lead author Dr. Li Zhiheng from the IVPP, “The primitive cranial features speak to the fact that most Cretaceous birds such as Cratonavis could not move their upper bill independently with respect to the braincase and lower jaw, a functional innovation widely distributed among living birds that contributes to their enormous ecological diversity.”

The enlarged scapula and metatarsal, according to palaeontologists, were mechanical compensators for an overall underdeveloped flight mechanism in the early bird.

Theropod skeleton alterations that signaled the beginning of the transition to flight and modern bird body plans demonstrate that natural selection, skeletal development, and ecological opportunities likely interacted. Early bird skeletons were subject to a great deal of variability and plasticity.