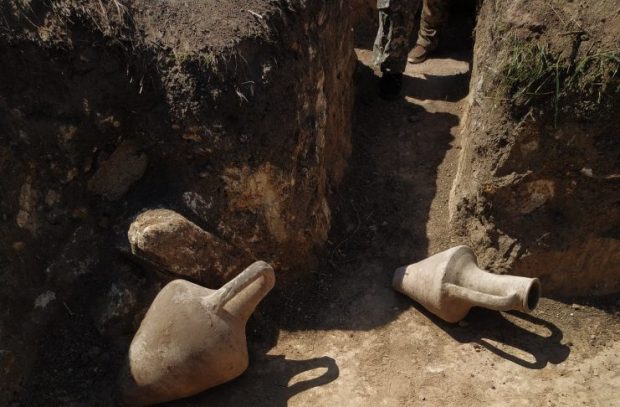 Soldiers from the 126th Regional Defense of Ukraine discovered ancient amphorae while digging trenches in Odessa in preparation for the Russian offensive.

Amphorae are ancient containers used for both liquid and dry goods transportation and storage. Although the use of amphorae can be traced back to the Neolithic period, they are mostly linked with the Ancient Greek, Roman, and Byzantine periods.

This discovery was uncovered while excavating trenches and defenses to safeguard Odessa. Odessa is Ukraine’s third largest city and a major port and transportation hub on the country’s south coast. The amphorae date from the third to fourth centuries AD, when Odessa was a Roman settlement. Odessa is known as Odessus that grew out of a Greek colony.

Archaeologists were unable to document the site due to the current circumstances in Ukraine and the continued bombardment by Russian invaders. The amphorae, together with a few pottery fragments, were painstakingly rescued by members of the 126th District Defense. Then they were sent to the Odessa Archaeological Museum for preservation.

Journalist Yana Suporovska from Kiev said: “Ukrainian soldiers dug trenches and found ancient amphorae. These amphoras were sent to the museum. We are protecting our history.”