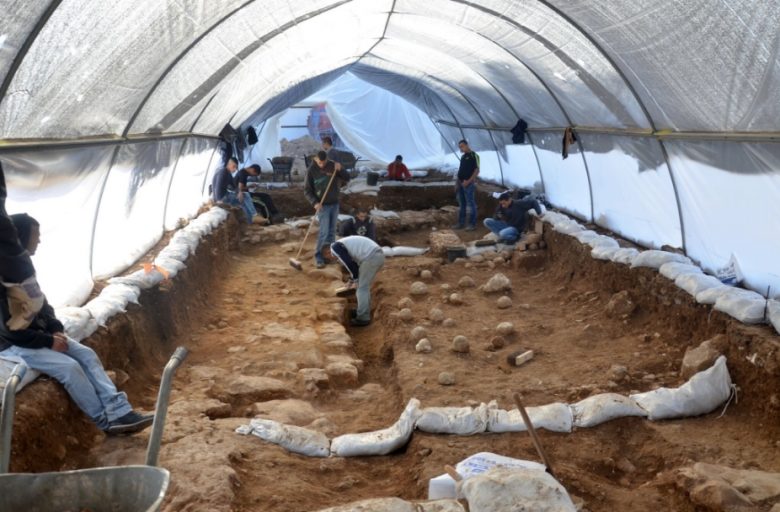 A third fortress wall that had been started decades earlier, abandoned, and then hastily finished by the Jewish rebels, was destroyed in the year 70 by Roman forces led by Titus. The Israel Antiquities Authority archaeologist Kfir Arbiv has recently conducted fresh research that suggests the Roman army may have placed at least some of its artillery in Cats Square.

Today, a location in Nahalat Hashiva, a contemporary Jerusalemite neighborhood, is known by this term. The square’s official name is Maccabi Mutzery-Mani Square, in honor of a pre-state Haganah militia officer who passed away in 1948. According to the Haaretz it’s unclear how Cats Square got its moniker, although one theory is that it was because of the prostitutes that frequented the area.

Albib’s theory that Cats Square was  where the Romans fired with artillery on Jerusalem came after several years of excavations at a site 200 meters away from the square: the Russian Compound, one of the most historic districts in the city.

Excavators led by Dr. Lina Avner of the IAA have found parts of the destroyed Third Wall of Jerusalem and hundreds of ballistae (an ancient type of catapult) balls beneath the Russian site. It dates back to the early days of the great battles between the Romans and the Jewish rebels, probably because it is outside the Old Town of the Ottoman Empire.It seems like the moment it stopped, according to Guy Stiebel who is an expert on ancient Roman warfare.

Jerusalem’s walls have been around for thousands of years, just like other walled cities in the Middle East. But the fortification wall we see around Old Jerusalem today was built in the 16th century by the Ottoman Empire, when they decided to repair the second ruined city wall from antiquity. What we see today is only a partial view of the third wall, which has disappeared.There is only a small section between a gas station and the U.S. consulate on Naomi Kis Street.

According to historical records, in the year 40, King Agrippa II began building a new wall to protect Beit Zeta, a new neighborhood in northern Jerusalem. Amit Reem, director of the Israel Antiquities Authority’s Jerusalem Region, says the construction of a new wall around Jerusalem would be the final step in fortifying the city.

The king was not able to finish it, in part because he was afraid of arousing suspicion among the Roman overlords, who were led at that time by Emperor Claudius. After the rebellion began in 66 CE, work on the wall continued by the Kanaim. However, it was not completed until after the insurrection ended in 41-44 CE.However, despite their lack of resources and haste, their efforts will likely be fruitless.

Some of the ballista balls the archaeologists found near the ruins of the third wall were broken after shattering on the stone wall. There could have been thousands of ballista balls, each designed to break down the wall. They were also launching spears, bolts, armor-piercing arrowheads, and smaller stones, gravel, and other objects to hit human targets.

The Romans did not invent the catapulting technique, but they adopted it with great enthusiasm. They were known for using ballistae, or as they are sometimes called, bolt-throwing machines, during sieges.

Depending on the size of the projectile, angles and more, objects could be hurled up to 400 or 500 meters, says Kfir. He says that a 400-meter distance is generally accepted as a reasonable estimate based on previous research at Masada and Gamla.

That point in the third wall was a strategic point for the rebels. “Whoever controls this spot, dominates the whole area and the fate of the city. This aligns with Josephus’ account that Titus commanded to penetrate the city from the northwestern side of the city wall,” Arbiv says. “Probably the defenders of the city concentrated at that point and defended it – hence also the Romans’ insistence on firing at that point. They then burst into the city from that place.”

Arbiv used software to examine the terrain of the region, essentially removing current infrastructure and building projects. He also took into account the (many) ballista projectile sizes, the height of the third wall as stated, and potential fire angles. He also took into account Josephus’ extensive, thorough account of the destruction of Jerusalem. So, using computer-assisted ballistic calculations, he came at the following conclusion: It’s possible that the Romans were firing from Cats Square when they attacked that portion of the Third Wall.

Where would all those ballista stones have come from? Going by Josephus, there were a lot: each of the three Roman legions aroung Jerusalem had 10 ballista and 55 catapults ,which means huge firepower, Stiebel says. “They would preare the stones on the site. At Masada and Herodion they used the local chalk but at Gamla [in the once–volcanic Golan] they used basalt. So the legions didn’t lug tons of stones about.” Which leads to a macabre wrinkle of history courtesy of Josephus: The Judean rebels would place observers in the towers on the wall to warn of incoming stones, which being made of local limestone, were white and easy to see. The Romans responded by painting the stones black, Stiebel says.

“In Jerusalem we have ballista stones of multiple calibers, mainly small – used against people. The big ones were used against the foundations.” The Romans were not, in short, firing one “machine gun” from one spot: they could create an arc of overwhelming firepower. And just like Jeremiah said, that evil would come from the north, indeed (from the rebels’ perspectve) it did.

One issue is that Cats Square as it is currently has a rather low topographic elevation. The ideal situation would be to launch missiles from a height.

Reem says that if the estimates are accurate and Cats Square is where the stone shower of death began, one explanation is that the Romans may have built it up or may have set their equipment on platforms, or perhaps the geography was considerably different 2,000 years ago.

Stiebel continues: “The overall image of that moment frozen in time appears apparent. In any event, looking at the large picture of the terrain, one shouldn’t get hung up on a hundred meters here or there.”

According to Reems, Josephus recalls a number of the preparations the Romans made prior to their siege, including leveling the area and maybe raising what is now Cats Square so they could better deploy their military equipment.

“We know from the historical sources that the Roman army employed massive siege rams to batter the fortification walls, and siege towers that reached the height of the walls, but these have not yet been found in Jerusalem,” Reem says.

However, according to historical evidence, they did invade the city and demolish it as well as the Second Temple, which they gleefully pillaged. They marked their triumph with not one, but two victory arches since they were so proud of it.