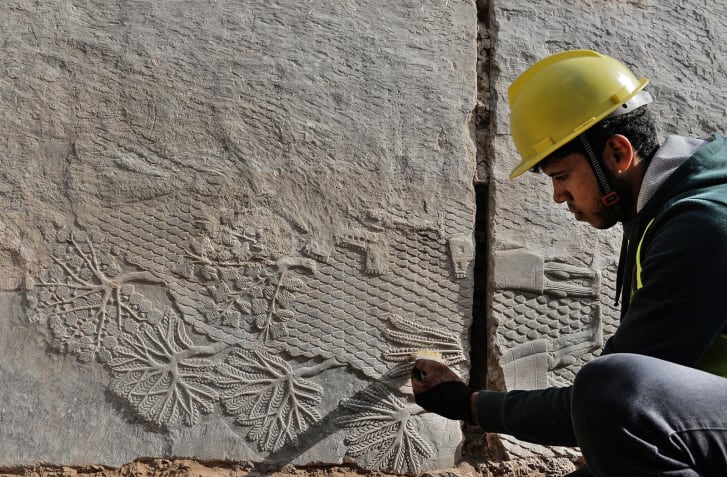 Archaeologists working to repair ISIS damage in Iraq discover Assyrian reliefs not seen in millennia. The rock carvings in northern Iraq are thought to date back about 2,700 years.

A joint US-Iraqi excavation team performing rebuilding work on the Mashki Gate, which ISIS militans destroyed in 2016, uncovered the discovery in Nineveh, east of Mosul.

Some of the world’s oldest cities and most ancient civilizations, such as the Babylonians, Sumerians, and Assyrians, lived in Iraq. Sennacherib, an Assyrian king, established Nineveh as his city approximately 700 BC and erected the Mashki Gate, known as the “Gate of God,” to secure it.

The gate, however, was only one of the numerous historic sites in the region that fell victim to a protracted armed struggle and acts of cultural vandalism. It was rebuilt in the 1970s, but ISIS troops using bulldozer and destroyed it.

During the occupation, archaeologist Michael Danti from the Pennsylvania University, told “Mashki Gate was one of the sites on which I reported when ISIS deliberately destroyed it.”

Danti, who oversees the Iraq Heritage Stabilization Program, discovered a that he called “so rare, unimaginable” as they started to restore the gate.

According to the news of Egypt Independent, buried beneath the gate’s ruins were seven slabs of marble bearing ornate carvings depicting Assyrian soldiers firing arrowsarrows among palm trees, pomegranates, and figs all belonging to Sennacherib’s palace.

“We were all awestruck and virtually speechless. It was like a dream,” Danti said. “No one predicted that we would be finding Sennacherib reliefs in a city gate.” The site had previously been the subject of archaeological excavations in the 1960s and 1970s, but this particular room had never been explored, according to Danti. While the gate was destroyed, “these remains were protected because they were buried,” he said.

As a result of the discovery, archaeologists are now going back to Mosul to learn more about the history of the Neo-Assyrian Empire. The British Museum and the Metropolitan Museum of Art in New York have both received similar findings in the past, but these slabs will stay in Iraq.

“These slabs are the official state property of the government of Iraq and the Iraqi people,” he said, adding that his fellow researchers at Pennsylvania and the University of Mosul “are absolutely delighted to have found these Assyrian reliefs.”

“Access to cultural heritage is a human right, and groups like ISIS want to sever those links forever as part of their campaign of cultural cleansing and genocide,” he said.

More unusual finds have also been unearthed in the area. Faida Archaeological Park, about 19 miles from Nineveh, was unearthed after the completion of excavations that started in 2019. 13 reliefs were found carved into the walls of a six-mile-long irrigation canal. Archaeologist Daniele Morandi Bonacossi described the reliefs as “unique” and “without parallel in Near Eastern rock art.”