With an area of ​​101.9 km², Barcelona is Spain’s second largest city. If you want to discover Spanish art, which is the leader of modern art, you should definitely visit Barcelona.

Picasso Museum (Museu Picasso) is an art museum where the works of Pablo Picasso, one of the leading painters and sculptors of the 20th century, are exhibited. Picasso, who also laid the foundation of the Cubism movement, died in 1973.

Picasso Museum, where Picasso’s works belonging to his youth period are exhibited in general, emerged when the Palacio de Berenguer d’Aguilar, an old city palace, was converted into a museum in 1963.

In 1970, the museum was expanded, and Palau del Baro de Castellet and Palau Meca palaces were included in the museum area, and then in 1999, with the addition of Casa Mauri and Palau Finestres, a museum consisting of five palaces was formed.

Visitors to the museum will see both five different palaces and the street, which was considered an art historical heritage in 1947, which will give you an idea why you should see this place.

Since the works are exhibited in a chronological order in the museum, the changes in the artist’s style are also presented to the visitors. Visitors will also witness Picasso’s journey to find himself over the years.

The museum is one of the three venues with the largest collections, along with the museums in Madrid and Paris.

The museum was opened in 1990 and serves in the Palau Nacional building, which was built in 1929. The completion of all parts of the museum took until 2004.

When you enter the museum, Romanesque (a style that emerged in Europe after 1066), Baroque, Renaissance and Gothic works will surround you and take you on a journey through periods.

Even if you are not very interested in art or seeing these works does not appeal to you, we recommend you to see this structure and take a look at the view of Barcelona from Montjuic Hill.

There are great works brought to Barcelona by the famous Catalan architect Gaudi, who was born in Reus City of Catalonia on June 25, 1852. The most important of these are Sagrada Familia and Casa Mila.

Casa Mila is a building built between 1906 and 1912. Although it looks like a standard building from the outside, when you enter inside, you come across two courtyards. Courtyards built so that all apartments can benefit from sunlight. Also, the terrace on the top floor, which gives a fantastic impression and offers a magnificent view, should also be seen.

Casa Mila is the last work completed by Gaudí. After this work, he undertook the construction of the Sagrada Familia Church, but died before it could be completed. The importance of Casa Mila comes from both its appearance and the materials used.

When the construction of the building started, many bureaucratic obstacles were encountered due to the fact that it did not comply with other zoning projects, and it could not be implemented exactly in accordance with the original design.

The building, which looks like it was carved out of a single rock and is adorned with iron balconies, was therefore called La Pedrera “The Stone Quarry” and was not well liked at the time it was built.

A undulating area with flues, suitable for the exterior of the building, with chimneys like works of art, awaits you in the attic.

Casa Mila welcomes its visitors with both night and day tours. In addition, a creation of Gaudi’s scale models is on display on the rooftop.

Science lovers come here.. It is one of the largest museums in Spain and Barcelona, ​​which started to serve in 2005 and with an area of ​​more than 30.000 m². CosmoCaixa is one of the most important museums in Europe.

Inside the museum, there are stairs that go down 5 floors in a spiral and a tropical tree that accompanies you from top to bottom in the space of these stairs.

Serving as a hands-on museum, CosmoCaixa offers the opportunity to do many scientific activities. Here you perceive and rediscover everything with your own senses. You can also relate events in the field and learn new things, with the opportunity to experiment and practice positive sciences.

Whether you want to learn or just to see, would definitely like you to see this museum that will leave beautiful images in your memory when you come to Barcelona.

5. The Design Museum of Barcelona

Operating since 2014, the museum is both one of Barcelona’s leading museums and a research center for fashion, design and decorative arts. The museum, which has a rich program of events and exhibitions throughout the year, also supports Barcelona towards becoming a design center in Europe.

The museum offers a service that will please its visitors who are interested in modern architecture, activities and decoration – design.

The museum presents the design history of Catalonia and Spain in a broad perspective. The historical journey of designs and the museum, which is directed specifically towards individual designers, consists of four sections where it exhibits its permanent collection.

A wide scale of ceramics, textiles and graphic design are exhibited in the museum, and the works in the chronologically arranged exhibition begin with works from the Renaissance period.

The museum, which contains many works for both ancient and modern times, is on the list of museums to visit in Barcelona.

This interesting building, which also includes the tomb of Salvador Dali, has been meeting with its visitors as a museum since 1974. There are more than 1,500 works in the museum, where there are paintings, sculptures, photographs and drawings.

When visitors enter the museum, they first pass through a circular courtyard and then meet Dali’s imagination. In this museum, where many ingenious works are found, there is Dali’s tomb under the glass dome resembling a fly’s eye.

The museum, which has the largest collection of Dali works, was also established by the owner of the works, Salvador Dali.

The Dali Theater Museum, which is a little outside of Barcelona, ​​draws attention with its design as well as the works in it. A building adorned with gigantic eggs and distorted loaves of bread. It is also referred to as the largest surrealist object in the world, with its large glass dome.

If the distance of one or two hours from Barcelona does not prevent you, this surreal museum is one of the places you must see…

The last title of our article on museums to visit in Barcelona, ​​Sagrada Familia… Gaudi’s last and unfinished work…

The church project, which was started to be built in 1882, was first started by Francesc de Paula Villar y Lozano, but the project was handed over to Gaudi due to the disagreement between the head of the San Jose Religious Union, who built the church, and Lozano.

The project, which continued under the leadership of Gaudi from 1883 to 1926 (Gaudi’s death date), was interrupted after Gaudi’s death due to lack of funds and war periods. The construction, which continues 135 years later, is expected to be completed in 2026, that is, on the 100th death anniversary of Gaudi.

This architectural work, which must be seen with its nature and religious motifs, was opened to active worship in 2010. Both its different architecture, the visual feast carved from the stone it offers, and its magnificent ceramics are worth seeing.

In addition, the view you can see from its towers is unique. Although it is thought that concrete was used in the parts that should be completed after Gaudi, contrary to Gaudi’s preference, and this was unfair to the architect’s work, it is a church that you should not go without seeing when you come to Barcelona, ​​and it is also the symbol of the city.

The place used as a museum is the crypt, which was first completed. The crypt section was completed by Villar, the first architect of the work. In this section, besides presenting the objects giving information about the construction of the construction to the visitors, Gaudi’s tomb is also located in this area. 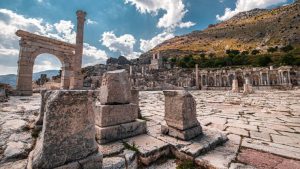