Diving into the wrecks of the Çanakkale War 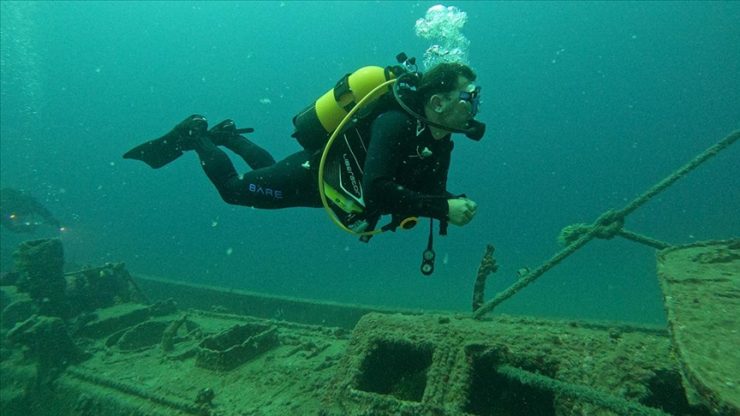 The wrecks opened to diving tourism with the initiatives of the Ministry of Culture and Tourism Çanakkale Wars and Gelibolu Historical Site Presidency attract the attention of local and foreign visitors.

The wrecks, which were previously forbidden to dive in the Çanakkale Strait, have turned into an underwater park with the theme of the First World War, with the protocols signed between the relevant ministries and various institutions of the Presidency of the Historic Site, the permissions obtained and the project prepared.

Sunken warships of different types and characteristics were opened to tourism at 14 points where diving is allowed in the region.

Guests from Italy dived on the British ships “HMT Lundy” and “HMS Louis”, which sank in the Suvla Bay of Anafartalar Harbor during the Çanakkale Wars.

Historical Site Director İsmail Kaşdemir told reporters that they are working hard to turn the region into one of the most important diving centers in the world.

Explaining that they believe the region will soon become the world’s most well-known and curious diving center, Kaşdemir said:

“We have this potential. We are the richest diving center in the world with 14 different dive sites. Each wreck has its own story. It takes divers on a different journey. Both the visual beauty, the wonderful atmosphere under the water and the historical wrecks attract divers and arouse curiosity. With our guests from Italy. We dived into the Lundy shipwreck. Lundy is actually a fishing ship, but it was used during World War I. It sank during the Çanakkale Wars and remains in one piece. This adds to the excitement of the dive even more.”

Ali Eyüpoğlu, the owner of the diving school, stated that there is a great interest in the World War I wrecks opened for diving by the Presidency of the Historic Site.

Italian magazine writer and underwater photographer Antonello Paone stated that the region is almost a diving paradise and said, “The diving spots make diving very enjoyable with their features. It offers an important diving experience.” used the phrases.

Expressing his happiness to be in Çanakkale, Italian diving instructor Gabriele Paparo underlined that Çanakkale’s historical story makes diving much more interesting, and emphasized that he wants to experience diving again in the underwater park in the future.

Visitor Eleonora Meddab, who came from Italy with her friends, said that she was very happy to have the experience of historical shipwrecks and other beauties here.

Expressing that he would like to come here again, Meddab said, “I am very happy. I am very excited to share my experiences here with the diving committee all over the world and with my colleagues in Italy.” said.

İkbal Ünüver, who came from Eskişehir, said that they came to Çanakkale as Eskişehir Diving Center and said, “We will dive into war wrecks here. The region is a very important place in terms of memories from the past. We invite all diving enthusiasts here.” he said.

Derya Kızak, one of the visitors who will dive, reminded that they are very excited and said, “We will dive into war wrecks for the first time. It is a very enjoyable and intriguing thing for us. At least we will see our history. It is very important for us to live that history, to keep that pulse, to feel those feelings. ” made its assessment.