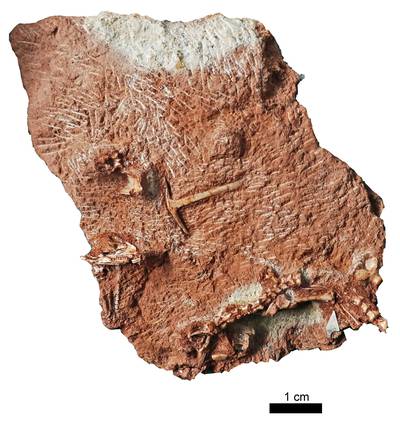 A fossil discovered in a cabinet at the Natural History Museum in London has pushed the origins of the contemporary lizard back 35 million years. The scientist who made the finding feels it is one of the most significant discoveries in this subject in recent decades.

The fossilized ancestor of modern lizards — such as monitors, the gila monster, and slow worms — was discovered in a quarry near the village of Tortworth in Gloucestershire, south-west England, in the 1950s.

A research associate at the School of Earth Sciences at the University of Bristol, according to David Whiteside,  “This is a very special lizard fossil and likely to become one of the most important found in the last few decades.”

“It is fortunate to be held in a national collection, in this case the Natural History Museum, London.” And he added “We would like to thank the late Pamela L Robinson who recovered the fossils from the quarry and did a lot of preparation work on the type specimen and associated bones.”

The revelation now means that all theories about the origin of lizards and snakes, collectively known as the Squamata order of reptiles, as well as theories regarding the rates of their development, will be altered. According to the news of The National, the group, lead by Mr. Whiteside, has given their new find the name Cryptovaranoides microlanius, which translates to “little butcher” in honor of the creature’s jaws’ array of razor-sharp slicing teeth.

“I first spotted the specimen in a cupboard full of Clevosaurus fossils in the storerooms of the Natural History Museum in London, where I am a scientific associate. Clevosaurus was a common enough fossil reptile, a close relative of the New Zealand tuatara that is the only survivor of the group, the Rhynchocephalia, that split from the squamates over 240 million years ago.” Mr Whiteside said.

“Our specimen was simply labelled ‘Clevosaurus and one other reptile. As we continued to investigate the specimen, we became more and more convinced that it was actually more closely related to modern day lizards than the tuatara group. We made X-ray scans of the fossils at the university, and this enabled us to reconstruct the fossil in three dimensions, and to see all the tiny bones that were hidden inside the rock.”

The University of Bristol’s School of Earth Sciences co-author Prof. Mike Benton said the lizard would have lived at a period of significant ecological change.

“In terms of significance, our fossil shifts the origin and diversification of squamates back from the Middle Jurassic to the Late Triassic,” he said.

“This was a time of major restructuring of ecosystems on land, with origins of new plant groups, especially modern-type conifers, as well as new kinds of insects, and some of the first of modern groups, such as turtles, crocodilians, dinosaurs and mammals. Adding the oldest modern squamates then completes the picture.”

“It seems these new plants and animals came on the scene as part of a major rebuilding of life on Earth after the end-Permian mass extinction 252 million years ago.”