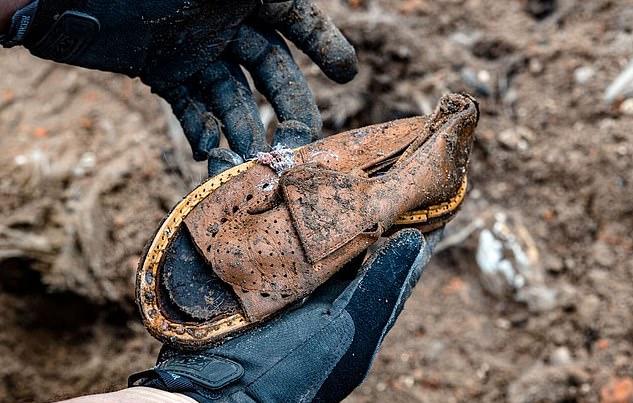 Archaeologists discovered a young girl’s shoe at the site of the Warsaw Ghetto bunker where Jewish resistance fighters made their last stand before committing mass suicide in 1943.

Excavation work has allowed the bunker’s secrets to be revealed for the first time in 80 years.

The researchers believe there it could also be the final resting place of several hundred insurgents, including ghetto uprising leader Mordechai Anielewicz.

The Jewish Combat Organization, which was instrumental in organizing and launching the ghetto uprising, had its headquarters in what is now the city’s Muranów district.

The Jewish Combat Organization, which was instrumental in organizing and launching the ghetto uprising, had its headquarters in what is now the city’s Muranów district.

A 10-year-old girl’s small shoe made of light leather with a heel made of cheaper material attached with nails was discovered alongside kitchen tiles, floor tiles, and dish fragments.

The excavations began in early June on a site bounded by the streets Mia, Dubois, Niska, and Karmelicka in the Muranów district, which was known as the Northern District before World War II and was primarily populated by Jews. It was within the ghetto’s boundaries from 1940 until 1943.

During the ghetto uprising, the headquarters of the Jewish Combat Organisation, which had previously been quartered at Miła 29, took refuge in the bunker built underneath the building which had two addresses – Miła 18 and Muranowska 39.

The Anielewicz Bunker, named after the Jewish Combat Organization’s commander Mordechai Anielewicz, was a large bunker with weapons and food, as well as water and electricity, built beneath a tenement that was destroyed in September 1939.

On 8 May 1943, at the end of the second week of the uprising, the bunker, which held about 300 people, was surrounded by Germans and collaborating Ukrainian troops.

Following a call to surrender, some of those in hiding, primarily civilians, emerged from the bunker and surrendered. The soldiers who remained inside tried to fight back, but the Germans began to inject gas inside.

According to Tosia Altman, one of the few people who managed to escape the bunker, the Jewish fighters committed collective suicide at the command of Arie Wilner.

Lutek Rotblat, one of them, shot his mother before killing himself. Mordechai Anielewicz and his girlfriend Mira Fuchrer were among the 120 militants who committed suicide.

About 15 people were able to escape. Some of the survivors died soon after from wounds or gas poisoning, while others died later in Warsaw’s “Aryan” (non-Jewish) neighborhoods.

Because no exhumation work was done after 1945, the buried bunker became a mass grave at the same time.

Due to similarities with events that took place from 73 to 74 CE in the ancient Jewish fortress Masada besieged by the Romans, the bunker on Miła Street is sometimes called the “Warsaw Masada”.

Following the war, a rubble mound was raised over the mass grave, and a commemorative stone was placed there.

The inscription in Polish, Hebrew and Yiddish reads: “In this place, on 8 May 1943, the commander of the Warsaw Ghetto Uprising, Mordechai Anielewicz, together with the staff of the Jewish Combat Organization and several dozen fighters of the Jewish resistance in the fight against the German occupiers, died as soldiers”.

Asked about the purpose of the excavations, lead archaeologist and historian from the Warsaw Ghetto Museum Jacek Konik said: “There is only Tosia Altman’s account of what the bunker under the tenement looked like. It was very big, it had five or six entrances, but we don’t know in which direction. We want to verify historical accounts.”

This project is being carried out by the Warsaw Ghetto Museum, the American Christopher Newport University and the Aleksander Gieysztor Academy in Pułtusk.

The excavations are revealing the underground cellar walls and vaults. Researchers have discovered everyday objects and household equipment since the beginning of the project.

Children’s shoes, kitchen tiles, ceramic floor tiles, glass vessel fragments, a 1940s jar of Nivea cream, vials, a tin lampshade from a cellar lamp, a weight, pliers, and coins are among the artifacts.

The works have been informed to Poland’s Chief Rabbi, Michael Schudrich. In the event that human bones are discovered, archaeologists have promised to halt their work immediately.