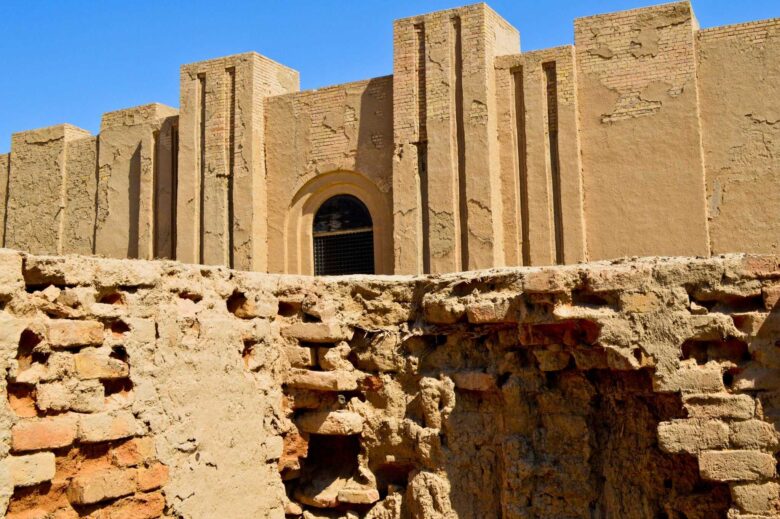 Climate change has resulted in salty groundwater in Iraq’s ancient Babylon, which is corroding some of humanity’s earliest structures. Now, archaeologists are preserving locations that were previously regarded as one of the world’s wonders using low salt mudbricks created by a local craftsman.

Iraqi researchers are preserving the Sumerian mother goddess Ninmakh’s temple using methods that date back 7,000 years in order to prevent salt from penetrating the structure’s core and obliterating it from the inside.

They are restoring the UNESCO World Heritage site’s ruins using finely crafted desalinated mudbricks because the infiltration of increasingly saline groundwater – an issue connected to protracted droughts and soil erosion in climate-vulnerable Iraq – is corroding them.

Ammar al-Taee, an archeologist with the Iraqi State Board of Antiquities who oversees the project and jokingly refers to himself as “the guardian of Babylon,” says that salty groundwater is their greatest adversary.

The wide empire’s former center, the ancient Mesopotamian city on the Euphrates River, was known for its towers and mudbrick temples. One of the seven ancient wonders of the world was its Hanging Gardens, which were constructed some 2600 years ago.

Heritage sites in Iraq and all over the world are at danger due to issues including salt intrusion, severe temperatures, flooding, and soil erosion that are partly attributed to climate change. Therefore a local craftsman who had inherited the time-honored method from his father taught Mr. Al-Taee and his team how to make the laborious, months-long unique low salt mudbricks, and this year they produced their first batch for repairs.

Before discovering soil with acceptable salt levels, the specialists searched the area for more than a week. Even then, according to Mr. Al-Taee, the soil needed to be “washed” to further reduce its salinity. The mud was then mixed with sand, grit, straw, and water before being formed into a big circle and fermented for a month, a process that drives the leftover salt to the mix’s edge, resulting in a white, crystalline fringe.

The remaining sludge was then formed into bricks after the unwanted salty crust was scraped off. The bricks were then arranged on plaited reed mats woven by local women’s cooperatives to give them a distinctive pattern.

According to Mr. Al-Taee, the entire procedure reduces the quantity of salt in new mudbricks by 75 percent.

The bricks were laid out in the sun to bake for a month before being ready for usage after being stacked under a tree’s shade for a few days to air.

He said that modern maintenance work on some of Babylon’s monuments employed concrete and cement to restore damaged facade and fill fractures, a procedure that worsened deterioration caused by rising salt levels paired with the region’s extreme humidity.

As part of another project, Mr. Al-Taee removes the concrete from the area around the ruins and replaces it with more porous materials, including river stones, another type of construction method used by the locals past millennia.

“Humidity doesn’t like cement and concrete. It can’t get out of it, so it began going after the weaker places. Of course, mudbrick is weaker, so it started exiting through it,” he said. The mudbricks and countless carvings that originally covered the walls near to the Ishtar Gate, a massive edifice that towered over Babylon’s main highway, eroded.

The walls leading up to the gate still bear an inscription of Marduk, the principal deity of Babylon. The inscription shows the god as a hybrid sphinx-like creature with the head of a snake, the front legs of a lion, and a scorpion’s tail. However, below him, an image of the weather god Adad is barely discernible because it has been destroyed by time and climatic change.

The lower portions of the walls are stained with salty white veins, and the only remaining portion of the original engraving of a bull is a hoof.

Despite the severity of the issue, Mr. Al-Taee claimed he gets no assistance from the Iraqi government. All of the money for his current endeavors comes from abroad.  He said the high cost of necessities, including potable water, which has increased in price in drought-stricken Iraq, saying that “The lack of support and investment from the government is our biggest challenge.”

The palm trees and flora surrounding the ancient city have wilted in the current dry weather, forcing Babylon’s archaeologists to battle vermin that have afflicted the ruins in addition to fending off salt.

According to the news of The Christian Science Monitor, mites and wasps that used to feed on the greenery have started to eat away at the mudbrick walls and foundations. Chemical pesticides cannot be used due of the potential damage to the ruins, thus Mr. Al-Taee must smoke the vermin out instead.

The consequences of the deteriorating drought are also being seen at numerous other ancient sites in Iraq.

The Uruk remains, the first city where writing is known to have been used, are also being damaged by salt. Jaafar Jotheri, a professor of geoarchaeology at Iraq’s University of Al-Qadisiyah said, “You see cracks wherever you go.”

Mr. Al-Taee believes that the country of Babylon may continue to mine its historical past for solutions to its current problems.

He said, “We should be just like the Sumerians, If we want to lessen the impact of climate change, then we should be using the right material to combat these changes in nature.”