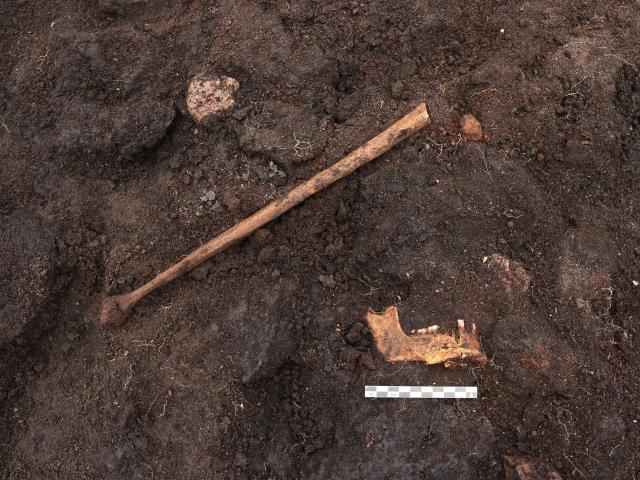 Archaeologists in Denmark have unearthed an ancient and well-preserved skeleton from the prehistoric period that may be the remains of a rituals that took place more than 5,000 years ago. This could be from a sacrificial ceremony.

According to the news of Insider, in the Egedal Municipality, close to Copenhagen, ROMU researchers were performing excavations on the site of a proposed housing development. ROMU is a group that represents ten museums in Denmark.

One of the crew members, Christian Dedenroth-Schou, discovered a femur poking out of the dirt while doing the survey. Further excavating revealed virtually all of the bones from both legs, a pelvis, and a jaw for Dedenroth-Schou and his team.

It was identified by researchers as a “bog body,” one of the numerous, typically male remains that have been discovered in bogs around Europe. The bodies frequently are in good condition despite being thousands of years old because of the bogs’ acidic and low-oxygen environs, which make it impossible for germs to survive. Sphagnum moss is converted into peat by a similar method.

Although the bones is incomplete and there are “no direct traces of rituals,” according to ROMU, archaeologists think the bog person wasn’t just the unfortunate victim of a random killing but rather the object of a deliberate ritual event.

According to the National Museum of Denmark, bogs were seen to be “the doorway between the realm of men and the world of the gods” and played a vital role for the ancient inhabitants of Northern Europe because of the resources they offered.

It is possible that the bog men discovered between 4,300 and 600 BC, or between the Neolithic and Iron Ages, were sacrifices made to the gods.

The discovery of a Stone Age flint ax, fragments of animal bones, and pottery close to the location of the skeleton discovered at Egedal led scientists to the hypothesis that the objects may have been left as part of a rituals.

The ax has never been used, according to Emil Winther Struve, the principal archaeologist of ROMU, which supports the idea that it was used as an offering rather than a murder weapon.

Struve said that:  “The find fits into a proven tradition of ritually burying both objects, people, and animals in the bog. This has been widely done throughout ancient times, and this is most likely a victim of such a ritual. Previous finds show that it is an area where ritual activity has taken place.”

The skeleton is still shrouded in mystery, including the person’s sex, place of residence, and date of death. The remains was shown to be from the Neolithic, according to Emil Struve, the excavation’s project manager, who told LiveScience that “traditions of human sacrifices reach back that long.”

The site has been drained, and when the earth thaws in the spring, the archaeologists want to employ DNA testing and conduct a more extensive dig to discover the remaining bones.

In a news announcement that was translated from Danish, Dedenroth-Schou said. “You think about whether that person would be happy to be found, or whether they would rather have rested in peace. After all, we don’t know much about their religion. Perhaps we are disrupting a notion of the afterlife. But at the same time, we have an important task in ensuring that the remains of a person are not just dug up with an excavator and end up in a big pile of dirt.”