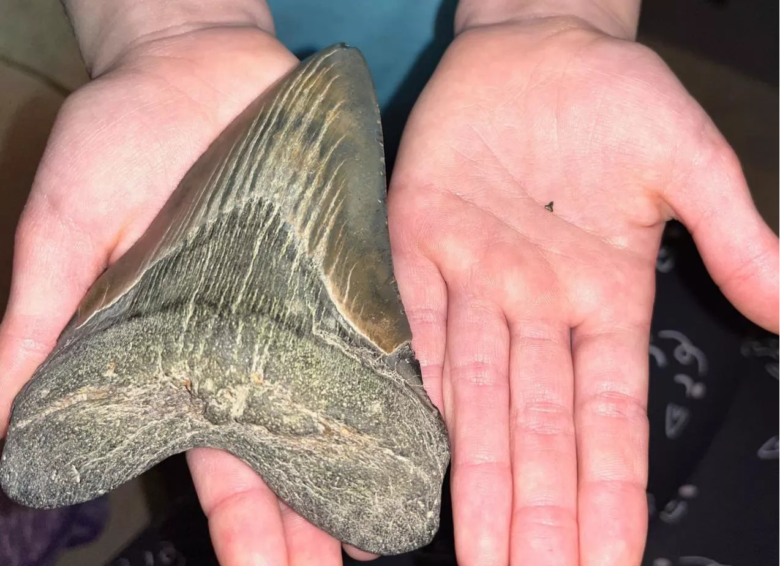 On Christmas morning, Molly Sampson told her mother that she wanted to go fossil hunting at a nearby beach and uncover an extinct megalodon fossil. She eventually succeeded in doing so.

It turns out that the palm sized big tooth of dark color teeth belonged to an Otodus megalodon shark, which perished at least 3.5 million years ago.

“She told me she was wading in knee deep water when she saw it and dove in to get it,” her mother, Alicia, told CBS News. “She said she got her arms all wet, but it was so worth it. The only thing Molly really wanted for Christmas was insulated chest waders because she knew she was missing out on some good fossil finds further out in the water,” she said of her daughter. “As soon as they finished breakfast, they got their waders on as quick as they could and headed to the cliffs with my husband Bruce.”

Because of the width of the tooth’s root, Godfrey noted that it is known that the tooth is specifically from the left side of the shark’s upper jaw. According to Godfrey, the shark that would have held the teeth was probably between 45 and 50 feet long.

Megalodon would have been able to bite through any whale or dolphin it could catch thanks to the tooth’s substantial root, according to Godfrey. Because occasionally we find fossilized whale and dolphin bones with tooth gouge marks left by Megalodon, we can conclude that it was an active predator.

The Australian Museum estimates that this species was alive between 23 million and 3.6 million years ago. According to the museum, they could reach lengths of more than 66 feet, or about three times the size of a great white.

Scientists were able to create the first 3D model of the massive shark last year. Researchers discovered that the megalodon could “cruise at faster absolute speeds than any shark species today and fully consume prey the size of modern apex predators” using it. They described the shark as a “transoceanic superpredator.”

Molly’s discovery, regardless of her future path, will always be a “once in a lifetime kind of find,” Godfrey said. He added that Molly discovered the tooth at a private beach, saying, “People should not get the impression that teeth like this one are common along Calvert Cliffs.” “Additionally, she didn’t need to risk injury by digging into the rocks to get the tooth because it was in the water. Her discovery is fantastic since it will inspire people her age to investigate the sciences and because she is interested in paleontology.”