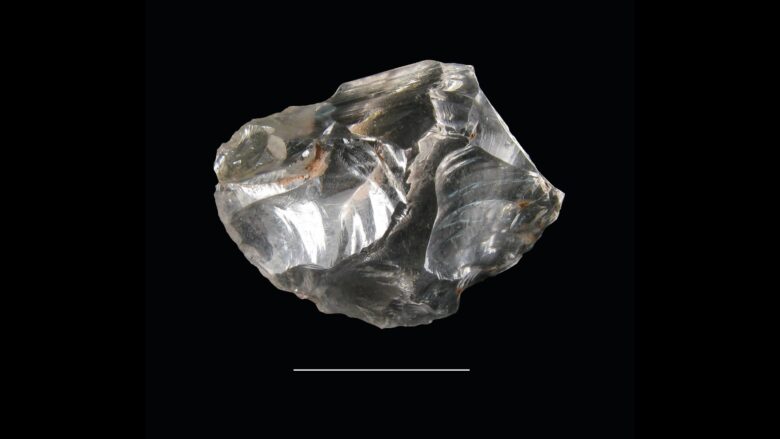 As the minerals were broken up into smaller bits and dispersed throughout burial mounds at Dorstone Hill, this discovery shows individuals in the Neolithic era used them to decorate tombs and other constructions.

Over 337 quartz crystal fragments were discovered at a 6,000-year-old ceremonial site about a mile (1.6 km) south of the King Arthur’s Stone monument, and it is considered to be “one of, if not the largest assemblage of worked rock crystal inside Britain and Ireland.”

“You can think of it as a really special event,” said Nick Overton, an archaeologist at The University of Manchester and principal author of a paper published in the Cambridge Archaeological Journal in July. “It feels like they’re putting a lot of emphasis on the practice of working [the crystal] … people would have remembered it as being distinctive and different.”

So how do the crystals look? According to the article published in Live Science, the crystals have the transparency of water, and some prismatic fragments can produce a rainbow spectrum from white light.

Because it produces light flashes when struck, triboluminescent quartz could have been more easily split into bits.

“If you bash two of these crystals together, they emit little flashes of bluish light, which is really fascinating,” said Overton. “It must have been an arresting experience — the material is quite rare and quite distinctive in this period where there is no glass and no other solid transparent material.”

In fact, the crystals that were strewn over the burial mounds at the Dorstone Hill site appeared to be so translucent at first that the excavators initially believed they were bits of glass. “It looked like glass, but then we noticed it was a different colour,” Overton added. “And we started to think, ‘Blimey, maybe this is something else.’ So that really got us in the mindset of looking for the stuff.”

Where did the crystals originate? Since the rock crystal was not mined locally, according to Overton, it most likely came from one of two locations that have been visited since the Neolithic: a cave in the mountains of Snowdonia in the north of Wales, about 80 miles away. Or a cave at St David’s Head on the southwest coast of Wales, about 100 miles (160 km) away.

They were then transported it is thought, through a trading network to Dorstone Hill and back then were in large crystals up to 4 inches (10 centimetres) long. According to the Overton, those enormous crystals were purposefully shattered into smaller pieces that were then gathered and placed at various structures at the site, particularly over the burial mounds.

This information could assist trace the origins, although this could also be disclosed, it is hoped, through chemical testing. “The largest piece we have is 34 millimeters [1.3 inches] in length,” he said.

“I felt it was really important to point out just how wonderful and how interesting this material is,” Overton said. “And it might help us think about other aspects of [the Neolithic] period, such as connections of trade or exchange, and also the way that people think about and engage with materials.”