Remains of a Roman round fountain found in Aizanoi, Kütahya 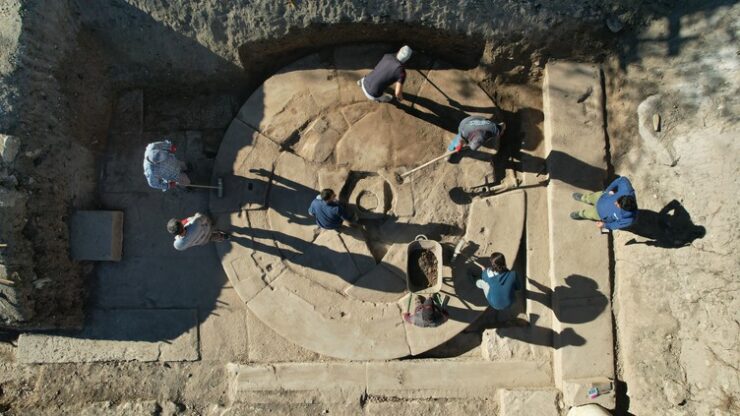 The remains of a Roman fountain were unearthed in the Ancient City of Aizanoi in Çavdarhisar district of Kütahya province in Türkiye.

Head of Excavation Prof. Dr. Gökhan Coşkun told AA that they carried out studies in the agora (bazaar), Koca Çay and theater within the scope of 2022 studies in Aizanoi.

The staircase structure at the monumental entrance gate of the Temple of Zeus, which was found last year in the agora, was completely unearthed. Coşkun; “Just in front of this staircase, in the courtyard of the agora, the marble floors belonging to the courtyard have also begun to be unearthed.” he said.

In addition, the remains of new shops from the ancient period were also found in the agora.

“Like all other cities in antiquity, the heart of Aizanoi ancient city was beating in the agora. We should imagine the bazaar of Aizanoi like this: There is an open courtyard in the middle, about 95 meters long and nearly square. The floor of this courtyard has been paved and covered with large-sized marble and slabs in all the areas we have excavated so far. During last year’s excavations, we uncovered 4 shops in the south of the agora. This year, we found that there were shops in the east of the agora, just like in the south. The identified shops are also lined up side by side.”

One of the most important findings of this excavation season was a 2000 year old fountain.

“The remains belong to a round-planned nymphaion (fountain) structure that we unearthed in the northeast corner of the courtyard of the agora. Such architectural remains are not common finds in archaeological excavations. For this reason, we were very happy and excited when we found it. The water supply of this fountain is located in the center. Water comes from the channel in the center. Let’s imagine it like a pool. “

In ancient times, people who visited the agora all day long and traded here probably made use of this fountain. Water came from a channel in the center of the fountain and there was also a drainage channel that prevented the pool from overflowing.

Prof. Dr. Coşkun said that such a structure with a round plan and a diameter of 5 meters 20 centimeters was found for the first time in Aizanoi, and that a similar example in Anatolia is in the ancient city of Kibyra in Burdur.