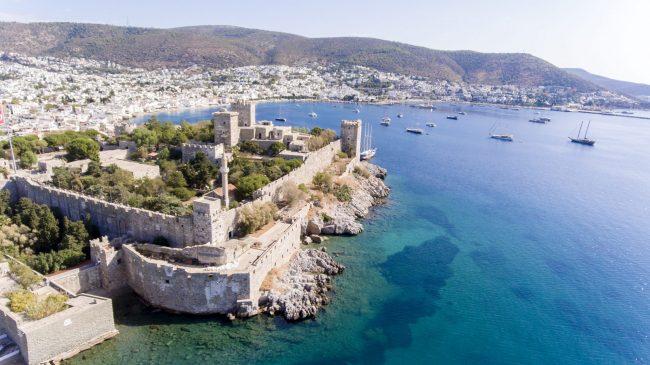 It has been reported that more than 50 thousand tourists visited Bodrum Castle in the first five months of this year, which was renovated with the restoration work carried out by the Ministry of Culture and Tourism in Bodrum.

Bodrum, which has made a name for itself with its bays that contain all shades of blue and its lush nature, as well as the sea, sand and sun, also comes to the fore with its history and culture.

Domestic and foreign tourists, who come to the district for a holiday with their families, definitely add Bodrum Castle to their tours. Located in the center of Bodrum, the castle is crowded with visitors throughout the day.

Bodrum Castle Underwater Archeology Museum Director Hüseyin Toprak told Anadolu Agency (AA) that guests who choose the district for a holiday must visit the castle, which is the symbol of Bodrum.

Stating that the Serçe Harbor and Uluburun Shipwreck in the castle attracted a lot of attention, Toprak stated that the Bodrum Castle, whose restoration work has been completed, has a brand new look and this has a positive effect on the visitors.

“People come to see the modernized version of the castle. We also have new excavations throughout Bodrum. Our artifacts unearthed during the excavations of the Konacık Pedasa Ancient City are exhibited in our hall here. Apart from this, many artifacts in the underwater studies we conducted with Dokuz Eylül University, Marine Sciences and Technology Institute. While 12 thousand people visited Bodrum Castle in the first five months last year, the number exceeded 50 thousand this year. We have tourists from Greece, Europe and India. We see groups coming from different countries, seriously. After the restoration works “The castle attracts more attention. We expect a record in the number of visitors this year. We think that by the end of October, close to 500 thousand holidaymakers will visit our museum.”

The couple Hatice and Taşkın Çağlar, who came from Antalya for a holiday, stated that they wanted to visit Bodrum Castle for about two years, but they were able to come this year, and expressed that they were very happy with the tour they came upon recommendation and being in the castle.

Harun Günan, who came from Muğla for a trip, stated that the castle sheds light on the past and said, “It is a place that should definitely be visited. I visited it, I definitely recommend it to everyone. I just came to see the castle. We also came across the Museums Week events. I enjoyed it very much.”