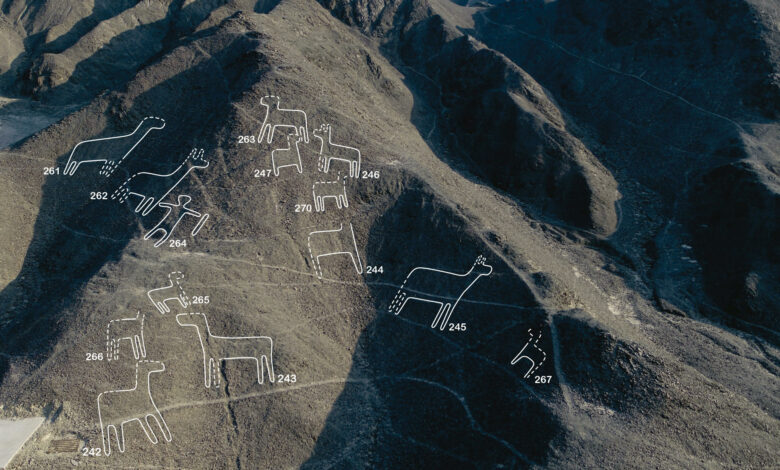 In Nazca, Peru, researchers unearthed 168 more ancient geoglyphs, which are pictures formed by lines painted across areas of dirt and visible from above.

According to the Yamagata University researchers, the pictures of people, camels, birds, killer whales, cats, snakes, and other creatures were most likely made between 100 B.C. and A.D. 300.

According to surveys conducted from June 2019 to February 2020, the geoglyphs were discovered by the team of researchers, led by Masato Sakai, a professor with expertise in cultural anthropology and Andean archaeology, the university said on November 8. The study team found 190 geoglyphs in the region during the earlier era, which spanned more than ten years.

The new geoglyphs were discovered on the Nazca plateau, which stretches 20 km to the east, 15 km to the west, and 20 km to the north, as well as in the Aja neighborhood in Nazca city proper.

Sakai said that: “We think this place close to the urban area, where geoglyphs are concentrated, was a place of importance.” The largest ones are about 50 meters long, while the majority are just 10 meters or even shorter.

According to the news of The Asahi Shimbun, in 2004, the university began studying the Nazca Lines, one of the most well-known geoglyphic locations in the world. In 2012, the team established the Yamagata University Institute of Nazca in the city of Nazca after beginning on-site studies in 2010.  36 of the 168 newly identified photos were located on a mountainside in the Aja region. In order to protect the geoglyphs, a ruins park was created there in 2017 after 41 designs were discovered there between the region in 2013 and 2014.

Sakai added: “Geoglyphs are in danger of being destroyed. We want to clean the park so that the 77 images can be seen in one glance, and build momentum among local people for preservation.”

By removing the black stones that covered the ground and revealing the white sand below, the geoglyphs were made. They may be divided into two categories: those made by making surfaces or lines by removing stones. 163 of the newly found geoglyphs, or almost all of them, were made by cutting away stones to form surfaces.

After the researchers fully implemented drones for study in 2019, the number of geoglyph finds significantly rose. The discovery of further geoglyphs has provided experts with fresh information on the significance of the enigmatic Nazca Lines.

“We look at writings to study and share knowledge,. It is possible that people in a preliterate society tried to communicate with geoglyphs and their distribution.” he said.

He stated that the group now plans to examine the dispersion of the geoglyphs in order to seek for trends. The team is also utilizing artificial intelligence to analyze photos taken during on-site investigations (AI). AI technology displays patterns that resemble geoglyphs. In Nazca, the crew investigates if they are indeed geoglyphs.