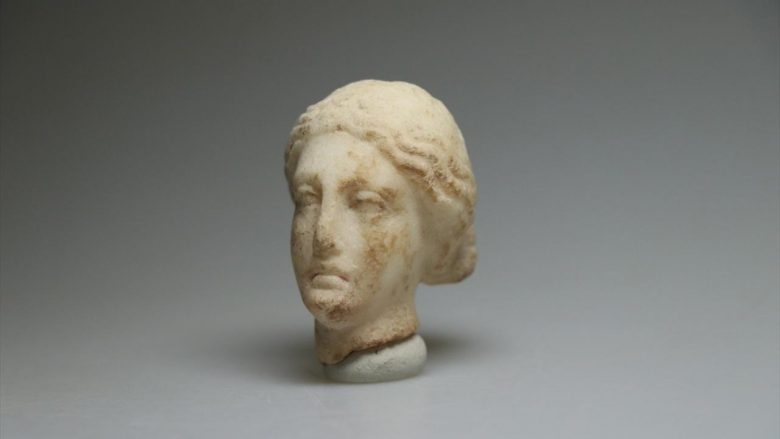 During the sounding excavations carried out by the Niğde Museum Directorate in the ancient city of Tyana, a female figure made of marble with clear facial features and intact was found.

Museum Director Yakup Ünlüler told Anadolu Agency that they identified a settlement and necropolis (cemetery) area in the northwest of the Tyana Ancient City in the Kemerhisar town of Bor district in 2018.

Explaining that the decision of the Nevşehir Cultural Heritage Preservation Board, excavations were decided in order to reveal the site potential here, Ünlüler stated that they carried out a sounding excavation in 2021 by the Niğde Museum Directorate.

Explaining that it was understood that the area was used as a necropolis area in the Byzantine period after the Roman period, Ünlüler gave the following information:

“In these studies, we found a fragment of a figure just below the surface soil in sounding 5, and we uncovered it with excavation work. To give general information about the work, it is made of fine-grained marble, and its eyes, nose and lips are processed in proportion to the chin structure. The figure has slightly plump lips and cheeks, slightly protruding chin, slightly arched nose, thick eyebrows and almond-like eyes. When you look at the hair situation, the curly hair, which is divided into two from the top, becomes a bun at the back in the form of a strip from the forehead. We think that the work should be dated to the Flavian period, that is, to the 1st century, with its hairstyle, but when we look at the details on the hair, the artifact shows us that it mostly belongs to the 2nd century.”

Ünlüler stated that they think that the statuette was made by a very high-ranking or rich person due to the high quality of the marble and the high workmanship.

“We think we’re going to get more of this type of work.”

Noting that the Roman period artifacts unearthed from the Tyana Ancient City are exhibited in the 4th hall of the museum, Ünlüler stated that this work will be opened to visitors after the arrangement to be made in the showcase.

Ünlüler stated that the area was declared a first-degree archaeological site by the Kayseri Conservation Board and said, “No application other than scientific excavations can be carried out in these areas. Excavations are planned in that region by the excavation directorate of the Ancient City of Tyana. We hope that we will reach more of this type of artifacts in this area with scientific excavations to be carried out because it’s an important place.”