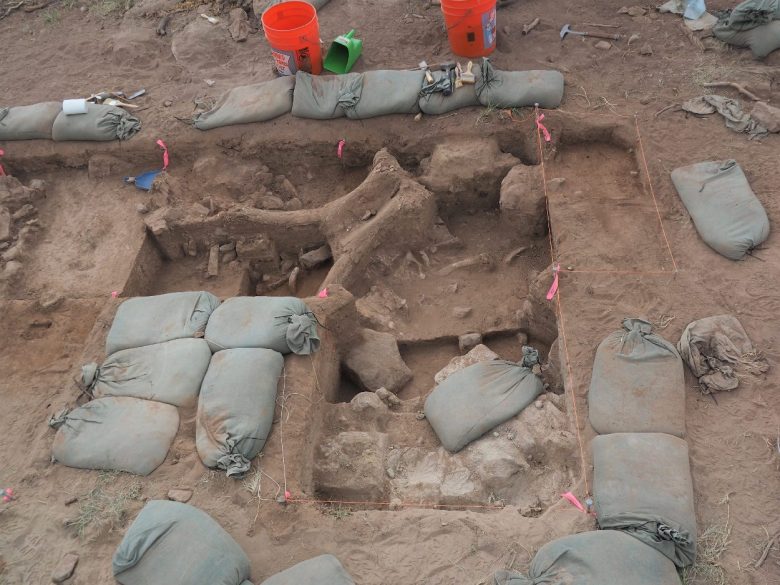 Humans broke down their carapaces with pieces of their long bones and rendered their fat over a fire, according to the remains found at a mammoth butchering site.

But this site differs from others from the same time period in one important way. It is located in New Mexico, where the majority of archaeological evidence dates the earliest human activity to thousands of years later.

According to a recent study headed by researchers from The University of Texas at Austin, the site provides some of the strongest proof yet that people arrived in North America far earlier than previously believed.

The researchers uncovered an abundance of data that is rarely collected in one location. It consists of controlled fire traces, bone flake knives with worn edges, and fossils exhibiting blunt-force fractures. The site also has a stable date of 36,250 to 38,900 years old owing to carbon dating tests on collagen taken from the bones of mammoths, making it one of the earliest known ancient human sites in North America.

Palaeontologist and professor at the UT Jackson School of Geosciences Timothy Rowe, the study’s principal author, stated, “What we’ve got is extraordinary.”, “It’s not a charismatic site with a beautiful skeleton laid out on its side. It’s all busted up. But that’s what the story is.”

Typically, Rowe does not study mammoths or people. He got involved because the bones showed up in his backyard. On Rowe’s land in New Mexico, a neighbor observed a tusk weathering from a hillside in 2013. When Rowe went to look into it, he discovered several fractured bones and a bashed-in mammoths head. It looked like a butchering operation. However, the locations of potential early human sites are unknown. It can often be challenging to distinguish between natural and human-made shapes.

The question of when people originally came to North America has generated discussion in the anthropological world as a result of this uncertainty.

Despite the absence of clearly linked stone tools at the mammoths site, Rowe and his co-authors found a wide range of supporting evidence by subjecting materials from the site to laboratory testing.

Rowe explained. “There really are only a couple efficient ways to skin a cat, so to speak, the butchering patterns are quite characteristic.”

Additionally, chemical analyses of the silt surrounding the bones revealed that the fire particles originated from a sustained and controlled burn, rather than a lightning strike or wildfire. The material also included pulverized bone and the charred remains of tiny creatures, notably fish (despite the fact that the site is more than 200 feet above the nearest river), but also birds, mice, and lizards.

Some scientists have hypothesized that North America had at least two founding populations: the Clovis and a pre-Clovis society with a different genetic lineage, based on genetic evidence from Indigenous communities in South and Central America and artifacts from other archaeological sites.

According to Heritage Daily‘s report, the New Mexico site, with its age and bone tools rather than advanced stone technologies, may provide support to this notion. Collins stated that the study contributes to the growing body of evidence for pre-Clovis communities in North America while also providing a toolset to help others identify evidence that may have been ignored previously.

Collins said, ” Timothy Rowe has done excellent and thorough work that represents frontier research,” “It’s forging a path that others can learn from and follow.”

Along with researchers from the Gault School of Archaeological Research, the University of Michigan, Aarhus University, and Stafford Research, co-authors of the study include Richard Ketcham, a professor at the Jackson School, and Romy Hanna and Matthew Colbert.