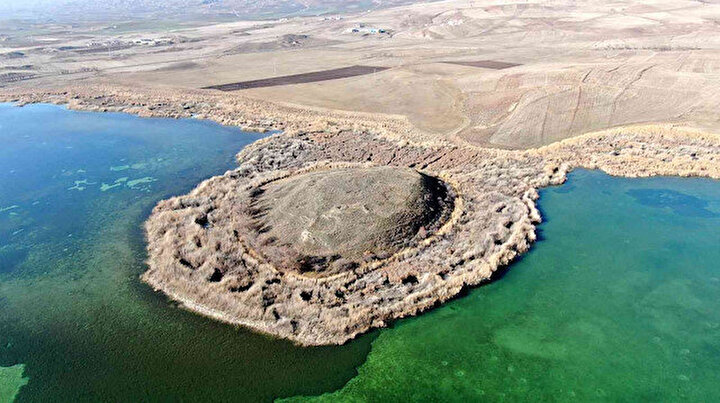 Located in Hafik Lake in the Hafik district of Sivas, the mysterious Pılır Mound draws attention with its unique features compared to other known mounds. Archaeological studies carried out on the mound in 1944 suggest that lake houses used in the Neolithic Period were found under the mound. Ümit Çayır stated that with the new studies to be carried out on the mound, very important findings belonging to the oldest periods of Sivas and its surroundings could be reached. While the necessary applications are being made for new studies to be carried out on the mysterious mound, it is expected that the permits to be granted for the studies will be issued in the future.

Ümit Çayır said, “The distinguishing feature of Hafik Pılır Mound from other mounds is that it is located in the lake. It is not located at the central point of the lake, but in an area close to the edge of the lake. Pılır Mound is also important in that it is one of the earliest settlements that has been identified during the surveys conducted in Sivas so far. The history of this settlement dates back to the Neolithic Period. In 1944, a short-term sounding excavation was carried out by Kılıç Kökten. According to the findings of the Kılıç Kökten team, it was understood that there was a settlement area rising on stilts within the lake belonging to the Neolithic Period. Considering the excavations made under the conditions of that period, if a new study is carried out with today’s technological possibilities, we will get answers to many questions about the mound.”

“Based on the ceramic pieces and flint stone tools found during the short-term excavations in the 1944’s, it is emphasized that this place may be the Neolithic Period. However, today, if excavations can be carried out here again with modern techniques, we will understand more clearly whether it belongs to the Neolithic Period or the later Chalcolithic Period. We will answer these questions with the new study to be done. Excavation work here is very, very important. I hope that work can be resumed on this important mound.”

‘’It is thought that there are lake houses built on stilts underneath of Pılır Mound.”

Remains of the settlement consisting of lake houses built on stilts were found under the mound. These houses, defined as palafit houses, rise on wooden planks nailed to the lake floor. We do not know whether the model of the houses here was used in Anatolia until now. These house models are used in various parts of the world today. But it continues to be seen especially in Northern European countries in the Neolithic Period and later periods belonging to prehistoric periods.

If an archaeological study is carried out in Pılır Mound, the prehistoric cultural layers of Sivas and the earliest periods of Sivas will be revealed.