This prehistoric fishapod turned back around after seeing life on land 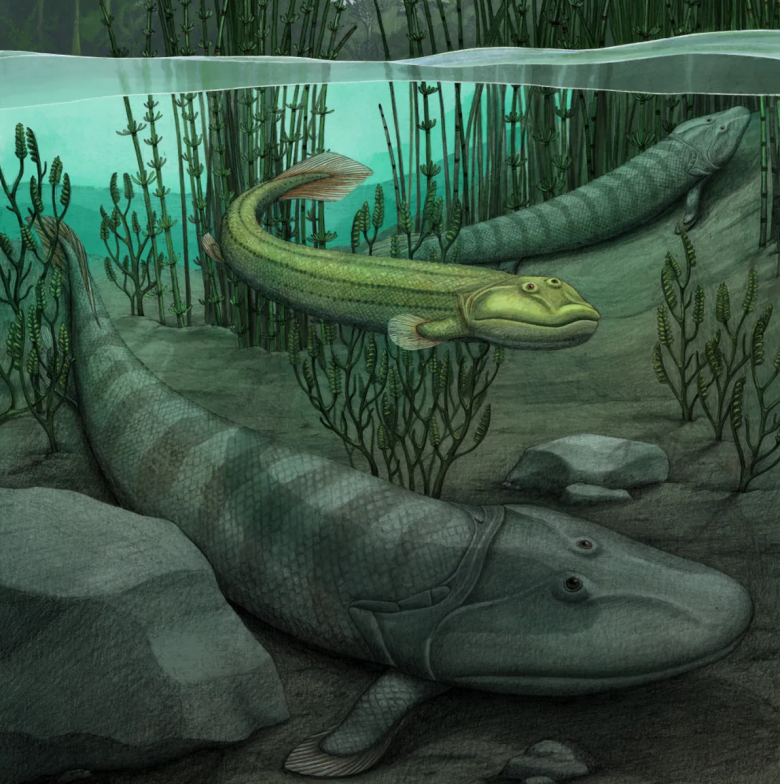 Tiktaalik’s slithering out of the water started a series of events that led to a world with rent, employment, and responsibilities. Like Tiktaalik, it appears that another fishapod once felt the same way, but that fishapod evidently took one glance at terrestrial life and replied, “No thanks.” As a result, it’s a decision that some tired modern humans regret.

The discovery of Qikiqtania, as the hesitant fishapod would later come to be known, arrives from the lab of Dr Neil Shubin – who also happened to co-discover Tiktaalik back in 2004.

The Qikiqtania fossil was discovered around the same period on Ellesmere Island, Nunavut, in northern Arctic Canada. However, it wasn’t until they went into lockdown that they were able to identify the specimen. Nature published the findings.

Dr. Justin Lemberg, who was using CT scanning to analyze the fossil 15 years after it was discovered, said in a statement: “We were trying to collect as much CT-data of the material as we could before the lockdown, and the very last piece we scanned was a large, unassuming block with only a few flecks of scales visible from the surface.

“When the first, blurry pictures of a pectoral fin appeared, we found it hard to believe. We were aware that if we had more time, we could have gathered a better scan of the block, but that was March 13, 2020, and the University closed all non-essential operations the next week.

Research was continued in the summer after being forced to shut down with the rest of the globe, this time with a saw that could cut away at the fossil to better reveal what was inside. They were able to picture a nearly entire pectoral fin and upper limb, including the humerus, thanks to their method.

The specimen was initially assumed to be a young Tiktaalik because of its modest size, which was just 76 centimeters (30 inches) long. Tiktaalik may reach a maximum length of 2.3 meters (9 feet). The fact that its arm shape indicated it was better adapted for aquatic paddling, however, suggests it was a different species that simply slithered back into the water after deciding that terrestrial life wasn’t for it.

Shubin stated in a statement, “At first we thought it could be a juvenile Tiktaalik, because it was smaller and perhaps some of those processes hadn’t developed yet. But the humerus lacks the components that would enable it to push up on land because it is smooth and boomerang-shaped. It is incredibly distinct and makes a fresh suggestion.”

Thus, “Qikiqtaaluk” or “Qikiqtani,” the traditional Inuktitut names for the area where the fossil was retrieved, led to the naming of our fish. Additionally, it bears the name “wakei” for evolutionary biologist David Wake, a professor at the University of California, Berkeley.

The data suggests that Qikiqtania was slightly older than Tiktaalik, coexisting with animals that were forming the first examples of fingers. The fact that it came so close to life on land before turning around shows that evolution isn’t always a linear process.

According to the news of IFL Science “Tiktaalik is frequently regarded as a transitional species because the pattern of changes from life in the water to life on land can be easily observed. However, we know that things in evolution aren’t often so simple,” said Dr. Tom Stewart, who also worked on the fossil.

“We don’t typically get to see this period of vertebrate evolution. We are now beginning to understand this diversity, as well as the ecology and distinctive adaptations of these animals. With so few species involved, it involves more than simply simple transformation.”

Cover Photo: Illustration of Tiktaalik roseae (under) and Qikiqtania wakei (center) in the water.