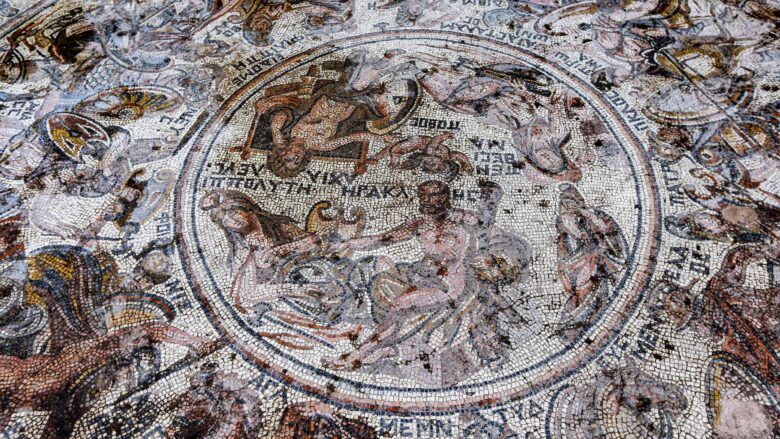 The biggest archaeological find since the start of the nation’s conflict 11 years ago, according to Syria, was a sizable, undamaged mosaic from the Roman Empire.

The mosaic, at 120 square meters (around 1300 square feet), was found in an old building that Syria’s General Directorate of Antiquities and Museums had been excavating. Lebanese and Syrian businessmen from the neighboring country’s Nabu Museum bought the property that dates back to the 4th century and donated it to the Syrian state. Each panel was filled with square-shaped, small colorful stones measuring about half an inch on each side.

One of the scenarios depicted in the mosaic, according to Dr. Humam Saad, associate director of excavation and archaeological research at the directorate, is a rare representation of Ancient Amazon warriors in Roman mythology. Mosaic, depicts Hippolyta, the leader of the Amazon warriors, being killed by Hercules (also known as Heracles to the Greeks) as he went to get her belt as the ninth of his twelve labors.

The photos are “rich in details,” Saad said, “What is in front of us is a discovery that is rare on a global scale”. The mural also features representations of the Trojan War, which is said to have taken place in ancient Troy (present day Türkiye) and was recorded in Homer’s epic poems “The Iliad” and “The Odyssey.”

Apart from that the mosaic portrays Neptune, Ancient Roman god of the sea, with 40 of his mistresses.

The ancient ruins beneath the building are still presently being excavated. “We can’t identify the type of the building, whether it’s a public bathhouse or something else, because we have not finished excavating yet,” Saad told.

Unfortunately, Syrian heritage sites have been looted and destroyed over the past decade of ongoing violent conflict. The mosaic’s future was uncertain, there were armed groups that tried to sell the mosaic at one point in 2017 and listed it on social media platforms.

Before the Syrian government regained the city in 2018, Rastan was a significant rebel stronghold and the scene of violent confrontations. Fortunately, Syria’s cash-strapped government has slowly been rebuilding Aleppo’s centuries-old bazaar after reclaiming it from armed opposition forces in 2016.

We hope that the common culture of the world and the science of history will not be damaged by more wars.