In China, 1000 fossilized eggs were found, providing evidence for the hypothesis that the lack of diversity among the dinosaurs may have contributed to their decline and eventual extinction.

Only birds are left as the living descendants of the dinosaurs due to a large asteroid that struck Earth roughly 66 million years ago and contributed to the global extinction of dinosaurs.

In the Late Cretaceous period, just before they went extinct, a variety of dinosaurs, including many different species, coexisted on Earth. However, scientists couldn’t agree on whether the dinosaurs were at their pinnacle or in decline when they died out.

The answer has been found by scientists at the Institute of Vertebrate Paleontology and Paleoanthropology (IVPP) of the Chinese Academy of Sciences. Evidence uncovered supports the idea that dinosaurs were not very varied before going extinct and had generally declined during the late Cretaceous Period.

The majority of scientific data about dinosaur extinction comes from North America. While some published studies claim that dinosaur populations in the area were prospering prior to their catastrophic extinction, other, more comprehensive research claim that the dinosaurs were actually declining, paving the path for their eventual demise.

By researching the Chinese dinosaur record, the Chinese researchers tried to determine whether this falling pattern persisted throughout Asia. The researchers studied more than 1,000 dinosaur eggs that had been preserved in fossil form as well as eggshells from the Shanyang Basin in central China.

According to the report of Nature World News, these fossils were discovered in strata of rock that around 150 meters thick. The scientists were able to precisely calculate the ages of the rock layers by examining more than 5,500 geological samples and using computer modeling.

The scientists were able to create a timeline at the end of the Cretaceous that covered about 2 million years and had a resolution of 100,000 years, representing the period shortly before extinction. Using this timeline, direct comparisons with data from various parts of the world are possible.

They discovered a drop in the diversity of dinosaur species using the data from the Shanyang Basin. For instance, of the 1,000 dinosaur egg fossils found in the basin, only three different species of dinosaurs are represented. Elongatoolithus elongatus, Macroolithus yaotunensis, and Stromatoolithus pinglingensis.

Sauropod and tyrannosaurus dinosaurs lived in the area between 66.4 and 68.2 million years ago, according to further dinosaur bones discovered in the locality. The Tyrannosaurus is one of the most famous dinosaurs, known to many through movies and dinosaur books. It is a carnivorous theropod characterized by having a large body, sharp teeth, and strong jaws. Sauropod, on the other hand, is a group of dinosaurs with lizard hips. The largest member is 37 meters (from head to tail) in length. These animals had very long necks, long tails, small heads compared to their bodies, and thick columnar legs.

As a result, for the two million years prior to the mass extinction, the variety of dinosaur species in central China was very low.

These factors may have contributed to ecosystem-wide instability, rendering non-bird dinosaurs helpless to a mass extinction that took place concurrently with the asteroid impact. 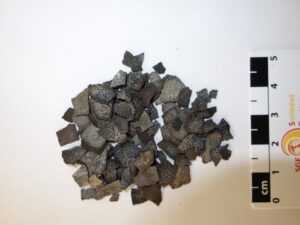