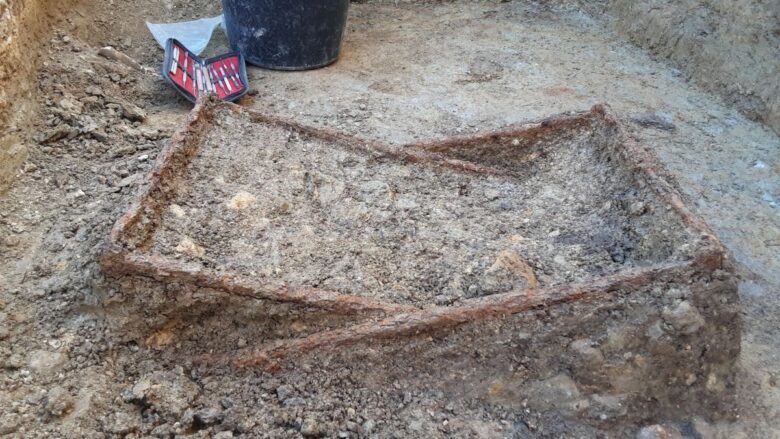 Coins, weapons, gems, and other goods are frequently unearthed in the ancient burials of prominent people, but researchers recently discovered a totally special grave good: a metal folding chair. The “special gift” was one of the many grave goods in the tomb.

The medieval metal folding chair was discovered in the village of Endsee in southeast Germany by a group of archaeologists from the Bavarian State Office for Monument Protection. It has an iron frame and is roughly 28 by 18 inches (70 by 45 centimeters) when folded.

According to Hubert Fehr, an archaeologist with the Bavarian State Office for Monument Protection, the chair dates to around the year 600 and was connected to the burial of a woman who was in her 40s or 50s. “While it’s too early after the excavation for us to know the identity of the woman,” Fehr said, “we do know that she was of high social status, as evidenced by the grave goods found at the burial site.”

Although just the metal component of the chair has remained, he believes it was made of other materials such as wood and leather. An X-ray of the chair may offer more information about its construction.

“The iron of the chair is covered with corrosion layers, and sometimes within those layers you’ll find parts of wood and leather that have survived,” he said.

In general, chair burials are extremely rare, with only one other recorded burial in Germany; 29 early-medieval grave sites in Europe feature chair burials, but only six are made of iron. Because these seats were sometimes made of organic materials like wood, ivory, leather, or fabric, the only surviving pieces are either the nails that held them together or the metal frames.

According to statement, scholars see the chairs as “special gift” because of their rarity and meaning. Fehr “The folding chair had a very specific symbolic meaning during antiquity and was used as an insignia or sign of power for bishops, priests, officers and others with high social ranking, which were often men in patriarchal Germany,” said. “Astonishingly, most of the chair burials that have been found are related to female graves, which shows that women were also linked to this general language of symbols related to signs of power.”

According to the news of Live Science, the site also included a variety of other grave goods, such as a belt with numerous brooches, a spindle whorl used for hand-spinning yarn, and an animal bone, possibly from a cow rib, which was probably used as a meat offering. The pearl necklace, which was draped around the skeleton’s neck and included tiny, multicolored glass beads, was also found at the site.

Lastly, a sizable glass bead with a millefiori pattern meaning it was flecked with various hues of fused glass helped researchers determine the burial’s date.

“Most beads were made of glass during that time period, but the styles changed rapidly in respect to their color and shape,” he said. “Yellow was primarily used around A.D. 600.”

Researchers also discovered the burial of a man next to the woman. According to the statement, the man was buried with a full set of weapons, including a lance, shield, and spade, as well as a leg comb most likely used for sheep grooming and a waist belt with a bronze buckle and belt bag. The man’s name is likewise unknown.

The researchers intend to X-ray the chair soon to discover if it contains any information about the woman’s identity or the chair’s manufacture.