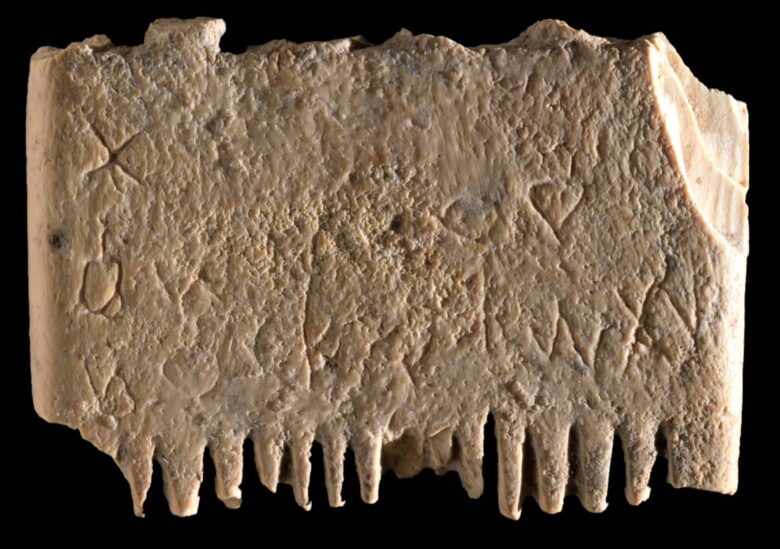 Israeli archaeologists have discovered a 3,700 year old comb that contains what is most likely the earliest whole phrase in Canaanite alphabetic script.

The message advises readers to comb their hair and beards to get rid of lice. The sentence contains 17 letters that read: “May this tusk root out the lice of the hair and the beard.”

According to experts, the find sheds new light on some of humanity’s earliest uses of the Canaanite alphabet, which was created approximately 1800 B.C and served as the basis for all later alphabetic systems, including Hebrew, Arabic, Greek, Latin, and Cyrillic.

The subject shows that lice infestations were a problem for humans back then. And archaeologists, they have even discovered tiny signs of head lice on the comb.

According to USA Today‘s report, the comb was discovered in 2016 at Tel Lachish, but it wasn’t until late last year that a scholar at Israel’s Hebrew University found the tiny phrases engraved on it. Tel Lachish is an archaeological site in southern Israel. Today it is an Israeli national park operated and maintained by the Israel Nature and Parks Authority.

While several artifacts with the Canaanite writing have been uncovered throughout the years, principal researcher Yosef Garfinkel of Hebrew University said that this is the first complete sentence to have been found.

Garfinkel said that, previous research on the lives of the Canaanites was limited to a few letters and perhaps a word here and there. He claimed, “We didn’t have enough material.”

The discovery also raises questions about the ancient era, according to Garfinkel. The discovery of the sentence on an ivory comb in the ancient city’s palace and temple district, combined with the mention of the beard, could imply that only wealthy men could read and write.

The Canaanites lived in the regions bordering the eastern Mediterranean and spoke a prehistoric Semitic language linked to contemporary Hebrew, Arabic, and Aramaic. The term Canaan appears throughout the Tanakh (the book containing the written religious sources of the Jews) and corresponds to the geographical region known as Palestine.They are thought to have created the first alphabetic writing system ever discovered.

Discovering a complete sentence would further indicate that Canaanites stood out among early civilizations in their use of the written word. “It shows that even in the most ancient phase there were full sentences,” Garfinkel said.

Experts compared it to archaic Canaanite script found earlier in Egypt‘s Sinai desert between 1900 and 1700 and dated the writing to 1700 BC. But the Tel Lachish comb was discovered in a considerably later archaeological context and carbon dating could not determine its exact age. Additionally, the era expert and Austrian archaeologist Felix Höflmayer, said this method of dating was not definitive.

He said that there just weren’t enough early alphabetic inscriptions that could be reliably dated at this time. However, he added, the finding was extremely important and will support Tel Lachish’s status as a key location for the early development of the alphabet. “Seventeen letters preserved on a single object is definitely remarkable,” added Höflmayer.