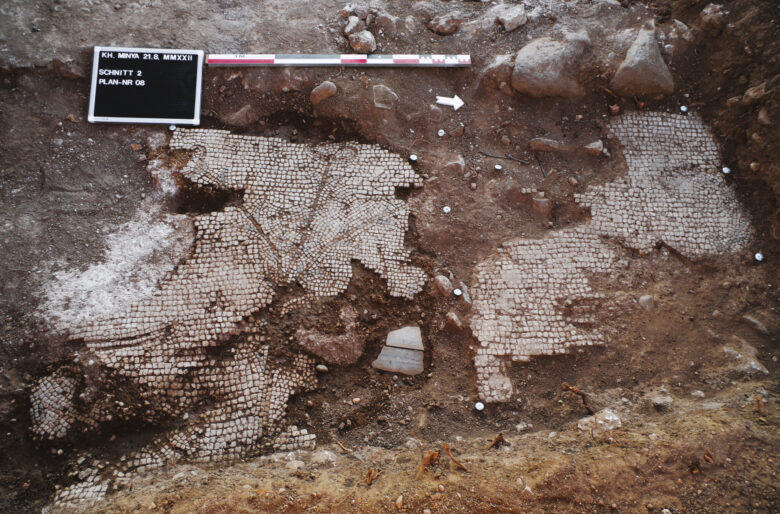 On the shores of the Sea of Galilee, close to Tiberias, ancient islamic mosaics were discovered that provide new insights into life in the Holy Land.

According to the news of The Jerusalem Post, archaeologists from a German university have discovered ancient mosaics from an early Islamic settlement near the Kinneret. The mosaics, which were discovered close to Khirbat al-Minya, are thought to have served as a point of interaction between Umar and the local Arab tribes as early as the fifth century BCE.

It’s possible that Khirbat al-Minya also served as a caravanserai, also referred to as a caravan inn. Travelers passing through the area at the time might rest and recover before continuing on their long, often hard journey. Khirbat al-Minya is an Umayyad-built palace in the eastern Galilee, Israel.

This discovery was made feasible by geomagnetic surface surveys, according to JGU archaeologists. Archaeologists from the Mainz team were able to verify that the caliph, the title of the highest Muslim civil and religious authority, intentionally planned his palace using this procedure and specifically-mapped “exploratory incisions.” This home included a mosque and a tall gate tower near a local town. The shoreline was thought to be almost completely desolate at the time of construction of this palace.

Prof. Dr. Hans-Peter Kuhnen of JGU said: “Our most recent excavations show that Caliph Walid had his palace built on the shore of the Sea of Galilee in an already carefully structured landscape that had long been inhabited.”

“It was here that considerable money was subsequently made through the cultivation of sugar cane, sadly causing lasting damage to the ecosystem.” The Mainz team also discovered a sugar cane processing furnace made of stone. Although sugar cane was one of the most important agricultural products from the Holy Land throughout the early Middle Ages and contributed significantly to the riches of the landowners, its cultivation required enormous amounts of water, and the operation of boiling furnaces required a lot of wood. The outcome was massive soil erosion and an environmental disaster from which the area around the lake had yet to fully recover by the twentieth century.

“Our research has brought this settlement adjacent to the caliph’s palace to light again, putting it in its rightful context among the history of human settlement of the Holy Land,” Kuhnen said. “Over the centuries, it experienced alternating periods of innovation and decline, but there was no real disruption to its existence during its lifetime.”

The Mainz archaeologists working on the project discovered basalt stone houses from several periods with plastered walls, a cistern, and colored mosaic flooring. The tiles were discovered with floral designs and depictions of the Nile Valley’s animal and plant life.

The mosaics was believed to symbolize “the life-giving power of the mighty river, which ensured Egypt’s fertility through the annual Nile flood.” The mosaics, which date from the 5th to 6th centuries AD, represent Nile-scene pictures of flora and fauna particular to Egypt’s Nile valley. Similar examples can be found in neighboring churches, such as Tabgha’s Church of the Multiplication.

This discovery, according to JGU archaeologists, demonstrates that although life in Israel may have undergone significant changes throughout the years, it never really came to an end, allowing it to flourish today.