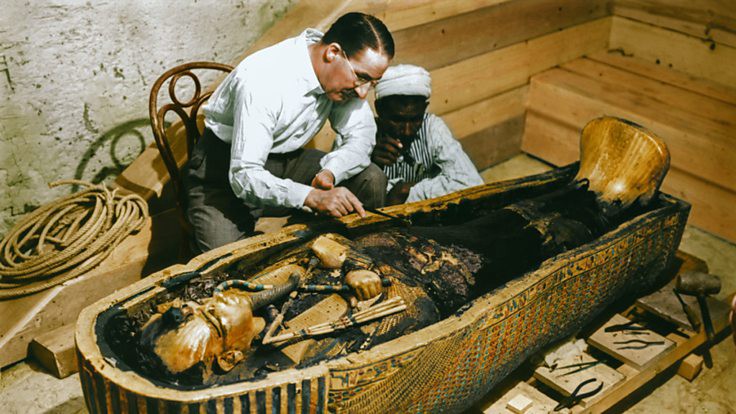 Howard Carter and his team of researchers were the first to enter Tutankhamun’s tomb, the most famous Egyptian tomb ever discovered, in 1922. The tomb was expansive, as were many tombs of the time, with hundreds of riches such as gilded beds, miniature golden statues, and elaborate amulets meant to guard the dead within their final resting place. Howard Carter also had played an important role in the discovery of the tomb of the Egyptian queen Hatshepsut.

However, there were speculations that the renowned archaeologist had gained more than simply fame from the discovery during the time between Carter entering the tomb and Egyptian officials opening the tomb. Many people thought that when he was inside the tomb, he stole numerous valuables. Since 1922, they have just been rumors because of the difficulty in obtaining concrete evidence.

New evidence reveals that, contrary Carter’s claims, an amulet provided to hieroglyph translator Sir Alan Gardiner by Carter was likely stolen from the tomb. Previously unpublished letters, detailed in a new book and first reported on by the Guardian, suggests Gardiner got it appraised by museum expert Rex Engelbach and was shocked to find the amulet was almost certainly stolen.

“The whm amulet you showed me has been undoubtedly stolen from the tomb of Tutankhamun,” Engelbach’s decision is stated, according to the Guardian.

“I deeply regret having been placed in so awkward a position.”

He claimed that he never told Engelbach how he got the amulet, in spite of the evident guilt brought on by possessing a stolen artifact. “I naturally did not tell Engelbach that I obtained the amulet from you,” Gardiner continued to Carter.

The whm amulet is believed to have been buried with the Pharaoh as an offering to the dead since the Egyptians believed that the dead could be maintained by wealth in addition to serving as offerings to the gods. Carter gave it to Gardiner as a gift and told him that it wasn’t from the grave.

According to the news of IFLscience, despite his significant discovery, Howard Carter was a competent (but somewhat awkward) man who struggled to make friends. The British government never praised him for his efforts, and he had numerous disagreements with Egyptian authorities following the discovery of King Tutankhamun’s tomb. He spent the rest of his life as a museum collector and dealer before passing away in 1939.

18 artifacts from the tomb were discovered in Carter’s collection after his passing. The artefacts were covertly sold to the Metropolitan Museum of Art and the Egyptian Museum in Cairo; all items have since been returned to Egypt out of concern for harm to ties between England and Egypt.