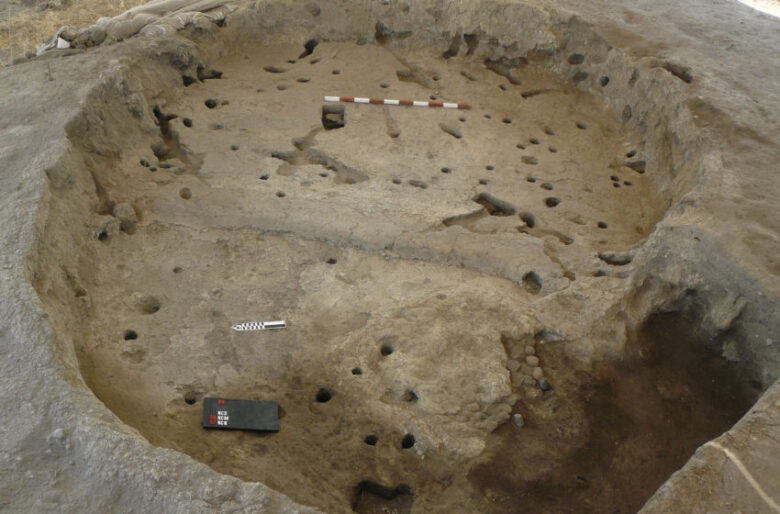 Included in the UNESCO World Heritage List, the 9,000-year-old Boncuklu Mound, 9 kilometers from Çatalhöyük, bears the first traces of agriculture and husbandry in Anatolia.

Boncuklu Mound takes its name from the large number of bead finds unearthed during the surveys. In the mound, the traces of the transition to settled life and the settlement patterns of the first agricultural communities in the Konya Plain are tried to be illuminated.

The mound was discovered in 2002 during surveys on Hayıroğlu street in Karatay district, one of the centers of Konya. After many obsidian stone tools and beads were found on the surface, it was understood that it may belong to the Prehistoric period. After completing the survey, excavation began in 2006.

Mustafaoğlu told AA, “We spent 14 seasons in Boncuklu Mound. Unlike now, this place was surrounded by swamps and wetlands in the Neolithic period. There were nomadic hunter-gatherers living in the region. Boncuklu Mound is very important in terms of starting some practices related to agriculture and animal husbandry, albeit at a very low level.”

According to archaeobotanical data, the Boncuklu Mound settlement contains traces of the first wheat, lentil and pea cultivation in the Konya Plain. It is clear that the Boncuklu community has practiced a fixed, small-scale form of food production. According to carbon and nitrogen isotope analyzes, the findings of sheep, goat feeding and herbivorous animal excrement in Boncuklu Mound also support this.

According to Prof. Dr. Baird, people preferred Boncuklu Mound because it has very suitable areas for hunting and gathering activities. Evidence found in the excavations, such as fish bones, waterfowl, wild boars and cattle they hunted in the region, show that the conditions were very favorable.

Prof. Dr. Baird “Boncuklu Mound is a very important place for us to see the first traces of the transition to settled life, agriculture and animal husbandry. The oldest Konya residents started agriculture in this region.” said

“There is continuity in the house. The use of the same house sometimes shows a date of 120-130 years. It has a life cycle of about 1600-1800 years. According to ancient DNA analyses, we come across mother, child and sibling burials in the same house. Here, it is possible to say the existence and continuity of kinship relations. In this process, people have made great progress in transferring the resources they find around them to agriculture. At the same time, there are repetitive floor plaster applications on the floors of the houses. This shows us that the people of Boncuklu have established deep ties with their homes.”

Beads were also found in the graves of men and women, in the spaces between houses, and inside the houses in Boncuklu Mound. Baird said that they thought it was not only used for ornamental purposes, but also had symbolic meanings.

“There is also very important evidence showing that Boncuklu Höyük is the ancestor of Çatalhöyük.”

“Boncuklu Mound was dated to 9200 BC and 11,200 years ago, suggesting that it is approximately 2,000 years older than Çatalhöyük. This indicates that Boncuklu Höyük is the direct ancestor of Çatalhöyük. Recent studies have shown that the Boncuklu community and a large proportion of the community in Çatalhöyük share a common genetic structure. There is also strong evidence that the population of Boncuklu played a role in the development of Çatalhöyük society. These are practices that preform those at Çatalhöyük and are not seen in other early Neolithic settlements in Central Anatolia. For example, symbolic elaboration of clean areas by dividing the floor area into clean and dirty kitchen areas. In such areas, there are human burials, animal heads such as aurochs are placed on the walls, floors and walls are painted, reliefs made of clay are used for ritual purposes. The world of abstract meanings created through rituals is a common feature observed between the two communities.”

Other than that, Boncuklu Mound was abandoned around 7600 BC. This situation dates back a few centuries before Çatalhöyük was founded.