Coins from the Maccabean period dating back 2,200 years discovered 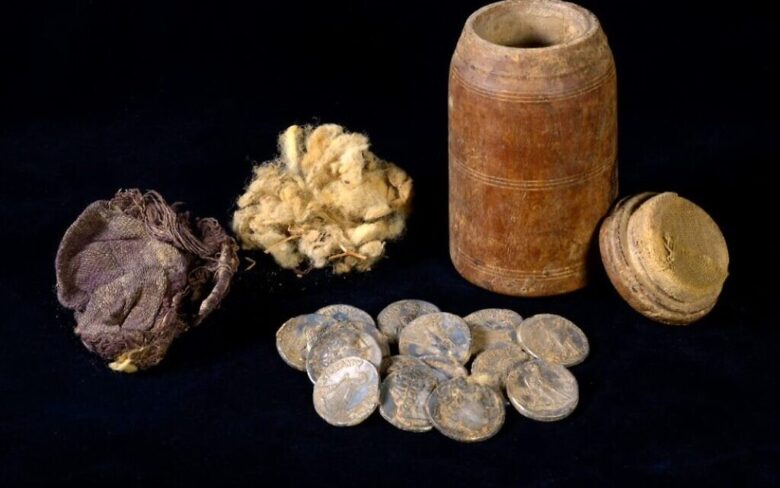 The Wadi Muraabat Caves near Nahal Darga are where the coins from the time before the Maccabean uprising were found.

The Hasmonean Museum in Modi’in will show a wooden box containing 15 silver coins from the Maccabean era in commemoration of Israel‘s history week, which will be observed throughout Hanukkah.

The excavation was done between March and May 2022 by the Jerusalem and Heritage Ministry and the Israel Antiquities Authority (IAA). One of the caverns had a number of discoveries, including an old wooden box.

According to the news of The Jerusalem Post, the upper half of the box, which was filled with loose dirt and had tiny stones pushed into the bottom of the rim, was filled with loose soil when the archaeologists opened it. 15 silver pieces, each wrapped in a layer of wool, were nestled beneath the dirt in a huge purple woolen cloak.

The IAA said that Ptolemy VI, ruler of Egypt, struck the identical batch of silver tetradrachm coins. Ptolemy VI ruled Egypt at the same time as his uncle Antiochus IV ruled the Seleucid Empire. The hoard’s later coin dates from 171–170 BCE, while the three oldest coins were produced around 176 BCE. The name “Shalmai” was engraved by hand on one of the coins in the Aramaic script.

IAA researcher Dr. Eitan Klein said: “It is interesting to imagine who the man was who fled to the cable and hid his private property there with the intention of returning. It seems that, due to the events of the time, the man was killed in battle and didn’t come back to take his property, and left it waiting for us for 2,200 years. The first clear archaeological evidence that the caves of the Judean Desert were used as an area of activity for Jewish rebels or refugees in the days before the Maccabean Revolt, or at the start of it.”

The Maccabean Revolt was a Jewish uprising against the Seleucid Empire and the impact that their Hellenistic way of life was having on Jewish society. It was headed by the Maccabees.

Although the uprising lasted from 160 to 167 BCE, it is said to have come to an end when the Maccabees achieved independence in 134 BCE.

The Jewish festival of Hannukah, which commemorates the Maccabean triumph over the Seleucid Empire, is based on the Maccabean Revolt.