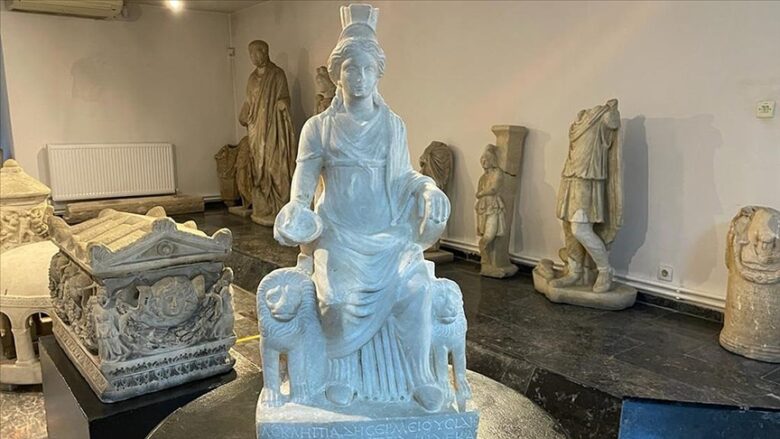 The statue of the “mother goddess Cybele”, believed to be the symbol and protector of abundance and fertility in prehistoric times, will be exhibited in the newly built Afyonkarahisar Museum.

Cybele symbolizes maternity, reproduction, femininity, the continuation of life and therefore fertility; she is usually depicted standing, sitting or lying down; her shapely body is always the subject of depiction. She can also be seen giving birth in some of the sculptures. In some statues of her sitting or giving birth, she is accompanied by two leopards or lions.

According to AA, the Cybele statue was found in the 1960s during road works in the Çavdarlı village of Afyonkarahisar. It was smuggled out of Türkiye and sold to Israel in the 1960s, and after a journey of tens of thousands of kilometers, it was brought to Türkiye from the United States on December 13, 2020. It was then exhibited at the Istanbul Archaeology Museums for a while.

On December 24, 2021, she was brought to Afyonkarahisar, where she was found. The day when the Cybele statue will be exhibited in the newly built museum here is eagerly awaited.

Afyonkarahisar Museum Director Mevlüt Üyümez said that the new museum building was built on an area of 55 thousand square meters and is a modern museum with a closed area of 25 thousand meters. With a modern understanding, a museum building where contemporary museology concepts are applied and the latest technological developments are used will be brought to the city.

The new museum building, where the Cybele statue will also be exhibited, will be located at the crossroads of Afyonkarahisar, so the museum will be at a point where citizens passing by can also visit.

The statue is dated by experts to the 3rd century A.D. The lions on either side of the 1700 year old statue of Cybele, who has been worshipped as the “mother goddess” in the Mediterranean basin, especially in Anatolia, since prehistoric times, symbolize her dominance over nature and animals.