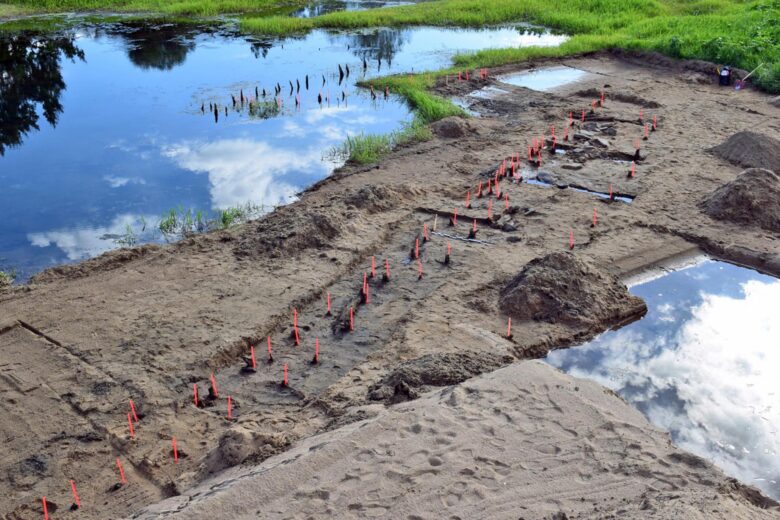 Water levels in lakes and rivers have drastically decreased as a result of the severe drought that has affected Europe this summer. The effects of the drought are clearly visible in France, among other places. The low water levels in the Loire River, France’s longest river, also presented findings that would contribute to the scientific world.

Discoveries have been uncovered along these waterways, including the remains of French medieval fishery from the 12th century.

The medieval fishery have been unearthed by Inrap (Institut national de recherches archéologiques préventives) research along the Loire River in western France. When sandbanks began to form in the middle of August, they were discovered along the river’s left bank, close to Île Poulas.

The stone and wood fittings that the archaeologists discovered were intended to form a “W”-shaped dike that would channel a portion of the river (and fish) into a network of nets and traps. It is thought that they were attempting to capture salmon and other upstream swimming fish.

According to the news of Medievalists, the fishery dates to around the 12th century, and archaeologists think the location could have held at least one mill-boat—a boat with paddle wheels that would remain fixed on the river and could later be used to run millstones or a sawmill. Additionally, it’s possible that the Loire River’s current route was slightly south of this region during the Middle Ages.

Due to drought-like conditions, water levels along several rivers in Europe have reached record lows, and areas of the Loire River that had previously been buried were open for archaeological investigation. The crew from Inrap used a mechanized shovel to further investigate the spots after using ground-penetrating radar to search for anomalies in the ground.

The archaeologists also discovered at least nine shipwrecks along another section of the Loire, dating from the 17th and 18th centuries and maybe purposely sunk to prevent erosion along the riverbanks.