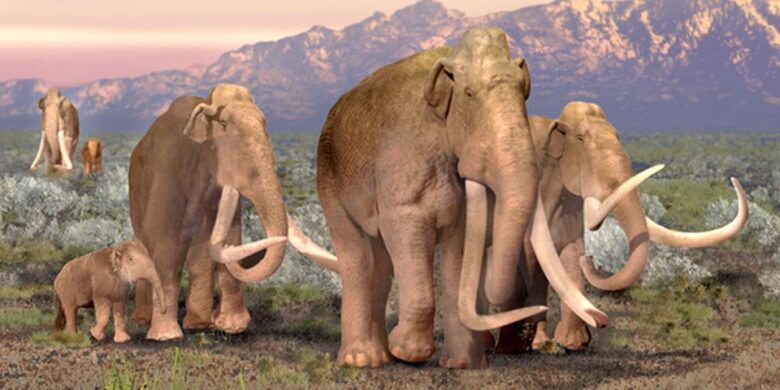 Archaeologists in Mexico have recently combed through a collection of mammoth tusks and stone tools, unearthing some of the oldest known evidence of violent encounters between Ice Age people and megafauna (a term used in zoology for large, giant animals) in the Basin of Mexico.

This group of artifacts was most likely a seasonal hunter gatherer camp on the banks of Lake Texcoco about 9,000 years ago, according to a recent research by Mexico’s National Institute of Anthropology and History (INAH).

Located close to Tenochtitlan, the former seat of the Aztec empire, Lake Texcoco was a natural lake in the Basin of Mexico. Since then, The body of the water has vanished, and Mexico City has nearly taken over the lake’s whole basin.

The relics were discovered in the early 1950s by INAH researchers who came across two sets of Columbian mammoth remains only 250 meters (820 feet) apart. Along with the pair of mammoths, they also found at least three stone tools that showed signs of use.

Over the past few decades, a number of research groups have explored objects, but in 2022, experts used a variety of new techniques to conduct their most thorough examination yet.

The Columbian mammoth (Mammuthus columbi), in contrast to wooly mammoths, roamed as far south as present-day Mexico. The Columbian mammoth was a hybrid species between woolly mammoths and another lineage evolved from steppe mammoths, according to earlier DNA investigations. The species was slightly larger than its wooly relatives and was armed with unique long, curly tusks.

The Columbian Mammoth was as tall as five vehicles stacked on top of one another and so massive that a human would have to be standing on the second storey of a building to touch its head. It also had enormous tusks that were easily long enough to span the width of two bicycles placed end to end.

According to the news published by IFLscience, it is also evident that people were slaying these enormous monsters in this region of the planet as early as 9,000 years ago.

Patricia Pérez Martnez, the project’s coordinator, said in a statement: “The survey indicates that it is a seasonal hunter gatherer camp, which would make [this] the first material evidence of the existence of this type of site on the shores of Lake Texcoco, around 9,000 years ago.”

The researchers explain, this site is particularly unusual because camps like this are typically found in caves and rock shelters in northern Mexico’s mountainous regions, rather than in open-air lower lands.

It appears that mammoth steaks were the only thing on the menu for these Ice Age people. The study also revealed evidence of charred fish bones. It appears that Ice Age mammoth hunters enjoyed catching fish in the lake and cooking them over an open flame. The fact that there is evidence of both mammoth hunting and lake fishing implies that these ancient people were adept at utilizing their surroundings.

“Today we have new techniques and technologies that will allow us to reevaluate the site, not only the finding at a cultural level with human interaction, but also to make a reconstruction of the landscape to define how it has changed and to understand if the first settlers took advantage of the megafauna and also subsisted on the resources of the lake.” added Martínez.