Excavations have begun when mastodon bones found in West Michigan 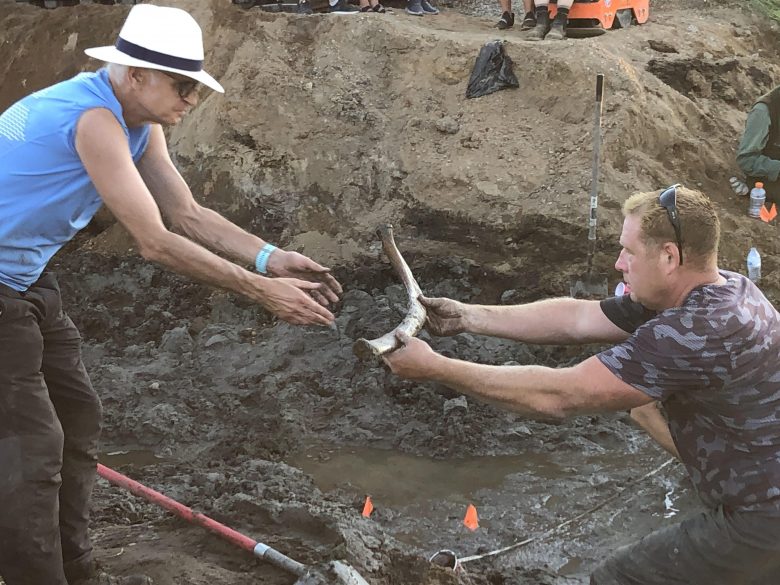 Kim Pugno decided to investigate after she learned that mastodon bones had been found nearby her home in the Grant area. She did assisting with the archeological find’s excavation. “This is so cool. It’s right in our back yard,” she said.

Pugno, a science teacher in Newaygo’s fifth grade, intended to inform her students about the dig. She assisted in removing water and muck while getting close to some of the bones. “What a way to start the school year,” she said.

The bones were found on Thursday, August 11, while working on a road project on 22 Mile Road, which is north of Kent City. A Kent County Drain Commission crew was replacing a culvert when a backhoe operator noticed something red in the soil.

When the backhoe operator asked the other workers to look more closely, they discovered two sizable leg bones that were clearly not from farm animals.

Following a flurry of phone calls sparked by the finding, Scott Beld, a research expert with the University of Michigan, and Cory Redman, a science curator at the Grand Rapids Public Museum, among other museum personnel, visited the site. The bones will likely be given to a museum.

Redman, who oversaw the excavation, “This was a very unique situation and opportunity,” said.

Around 12,000 years ago, massive, elephant-like beasts called mastodons inhabited the earth. While workers were constructing a housing complex close to Byron Center in West Michigan in 2017, another mastodon was found there. It was determined that the animal was a male who lived for 20–30 years.

The U of M Museum of Paleontology’s archeologist Beld said the Kent County mastodon appears to be a youngster, between 10 and 12 years old. The majority of the mastodon bones discovered in Michigan, according to him, are those of adults. “It’s a little unusual because it’s such a young animal,” he said. “It’s not the adult (dental structure).”

According to Michigan Live‘s report, during the excavation, workers placed various bones in 108 bags. People who arrived on the scene were allowed to assist Redman, largely by clearing away muck and bailing standing water.

According to Beld, scientists will likely analyse the bones to determine the animal’s exact date of death. “We got a lot of vertebrae, a lot of ribs. We got most of the leg bones. We got a lot of foot bones,” he said.

Redman estimated that between 40 and 60 percent of the animal’s bones were found. The bones will likely be shown after being cleaned, dried, and preserved for a year to 18 months.

He didn’t think the mastodon could be rebuilt as a standing skeleton because not enough of its bones were discovered.

“Very rarely do you find a complete skeleton especially of a large vertebrate like this. We didn’t find the skull or any of the tusks, unfortunately, but we found a lot of other really great stuff,” he said.

Because the bones were discovered in a field near to the road, Redman was grateful that the property owner provisionally agreed to provide the bones. The bones will be studied by the University of Michigan, but they will be housed at the Grand Rapids Public Museum.