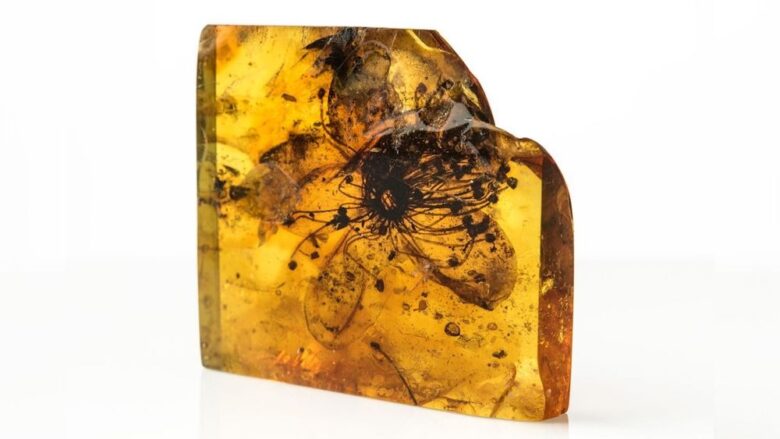 Scientists discovered fossil of a flower blooming in amber: a nearly 40 million year old flower. The largest fossilized flower that has ever been found.

The flower has been known for 150 years, but it has just recently undergone a formal identification as a new species, providing fresh information about former climates and ecosystems.

The stunningly preserved flower, which is roughly 1 inch (28 millimeters) across and three times bigger than the next-largest amber embedded bloom ever discovered, was discovered in the Baltic woodlands of northern Europe in 1872. (Amber is the fossilized resin of Pinus succinifera trees, a pine species from the Pinaceae family. It is a semi-transparent, easily broken fossil of various colors from light yellow to red, and gains the ability to attract small objects when buried. Amber has been adopted as one of the most favorite stones in ornaments for centuries. It is not possible to compare it with any transparent stone in terms of brightness and color. Fossilized insects and the abundance of wild plants clinging to amber are important features not seen in other stones.)

It dates to the late Eocene epoch (roughly 38 million to 33.9 million years ago). According to the statement made in Live Science, naturalists initially identified the specimen as the old flowering evergreen Stewartia kowalewskii, which is now extinct.

The flower was then kept in Berlin’s Natural History Museum for the following 150 years. However, the identity of the flower has been a source of controversy for years.

Pollen specks were taken and inspected under a microscope along with the anatomy of the bloom to put to rest the question of the genus and species of the blossom. They came to the conclusion that the flower wasn’t Stewartia kowalewskii or even a member of the Stewartia genus. The New York Times states that it was actually a part of Symplocos, a genus of blooming shrubs and tiny trees not present in Europe today but widespread in modern East Asia. “Symplocos kowalewskii” was suggested as a new name for the flower by the study’s authors.

Despite their rarity, plants preserved in amber offer paleobotanists a plethora of data, according to Eva Maria Sadowski, a postdoctoral researcher at the Natural History Museum in Berlin. Scientists now have a greater knowledge of the ecological variety of the Baltic amber forest and how the planet’s climate has evolved through time thanks to the reclassification of this flower.

Regan Dunn, a paleobotanist and assistant curator at La Brea Tar Pits and Museum in California, said that these tiny grains are natural recorders of past climates and ecosystems that can help us measure how much our planet has changed in the past due to natural (nonhuman) causes. This helps us comprehend the extent of our species’ impact on the earth.