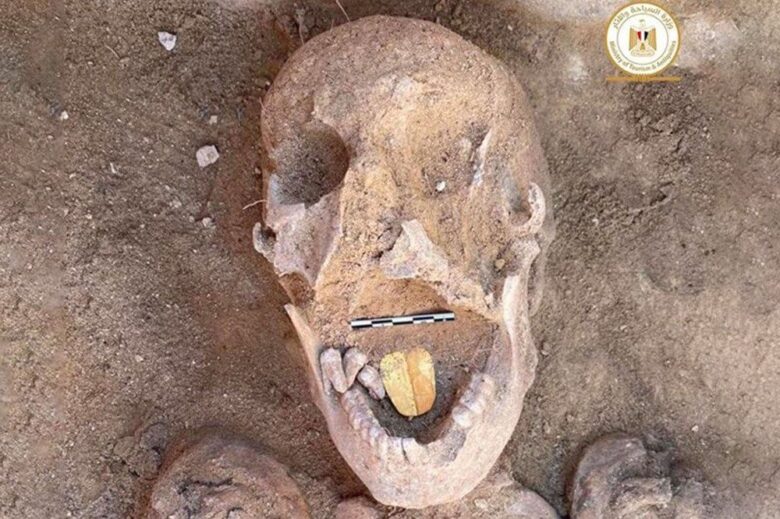 In Egypt, archaeologists have discovered many ancient mummies with solid gold tongues. The strange discovery was found when preserved bodies dating from between 300 BCE and 640 BCE were discovered at the Quweisna necropolis in the central Nile Delta, roughly 40 miles north of Cairo.

According to a news release from Dr. Mustafa Waziri, secretary general of the Supreme Council for Archeology, experts examining tombs at the location discovered many mummies with gold chips resembling human tongues in their mouths.

According to the reports of New York Post, experts think that in order for the departed to communicate with Osiris, the ancient Egyptian “Lord of the Underworld,” genuine tongues of the dead were removed during the embalming process and replaced with a piece of gold that resembled the organ.

According to Waziri, gold was found on the bones of some mummies that had linen wraps covering them because of mummification process. The mummies were reportedly in bad shape when they were discovered.

Golden chips fashioned into scarab beetles and lotus flowers, as well as funeral amulets, earthenware, glues, and tar used in the embalming process, as well as the remnants of wooden coffins in the shape of humans and many copper nails, were also discovered in the ancient cemetery. Following the first discovery of the Quweisna necropolis in 1989, several excavations have been place over the last three decades.

The cadavers from three separate historical eras were interred in the cemetery’s freshly discovered addition where the golden tongued mummies were discovered. According to Dr. Ayman Ashmawi, director of the Egyptian archeology division of the Supreme Council of Archaeology, each burial level revealed signs of numerous rites and burial practices. Mummies decorated with priceless metals had already been unearthed in Egypt.

In 2021, archaeologists discovered a 2,000 year old skull with a gold chip in its gaping mouth at a location known as Taposiris Magna, which means “great tomb of Osiris” and is located close to the city of Alexandria. Later the same year, 2,500-year-old mummies of a man, woman, and kid with solid gold tongues were discovered.