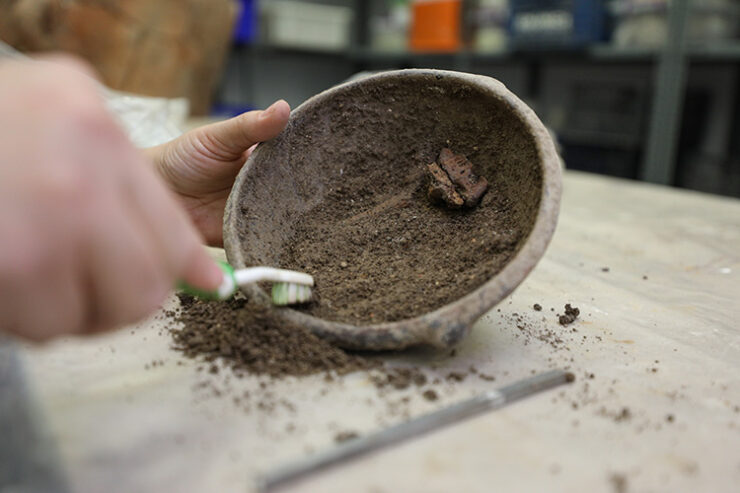 Many finds were unearthed during the 2022 Yassıtepe excavations carried out in the Yeşilova Mound in the Bornova district of İzmir.

The Yassıtepe excavations in İzmir continue to shed light on history. With the permission of the Ministry of Culture and Tourism and the support of Izmir Metropolitan and Bornova municipalities, more than 100 finds were found in the excavations conducted under the direction of Ege University Archeology Department lecturer Associate Professor Zafer Derin.

Among the artifacts sent to the Izmir Archaeological Museum this year, there were axes about 8,000 years old, a 5,000-year-old scent and ointment container, and needles made of bone.

In addition, a 5,000-year-old terracotta bowl was found during the Yassıtepe excavations. “We guess that they probably left the food made from a small animal such as a lamb or goat without being able to eat it due to disaster or other reasons. We can find the residue, including the bones, in this container. As we have already determined from various findings, they used both animal and plant foods in their kitchens. We can see that they love and eat a lot of animal foods.” said Zafer Derin.

Derin stated that the bowl was not damaged because it was located in a sheltered area under the ground. “People can leave where they are at the time of disaster. Maybe this is their last meal.” said.

In addition, a 19 gram stone and a commercial seal was found during the 2022 excavations. “We have findings reflecting both urbanization and trade. We think the stone we found measures certain things that are particularly sensitive, maybe bronze, metal, gold, silver.” said.

According to the news of AA, similar stones were also found in excavation sites such as Beycesultan Mound. This indicates an active commercial life in the region.

About other special finds obtained during the excavations: “Women are always fond of their beauty. We found special containers made for them in which fragrances or various ointments were put. They embroidered the patterns of the dresses on the container. This is not something you can find everywhere, they often take them to their graves. Apart from this, there are needles made from small cattle bones, which they may use as hairpins.” said.

Large and small stone axes were also found in the region. These axes may have been used for cutting leather, butchery or wood carving.

Zafer Derin said that they will continue the excavations in and around the Yeşilova Mound and that they want the area to have the status of archaeological site.