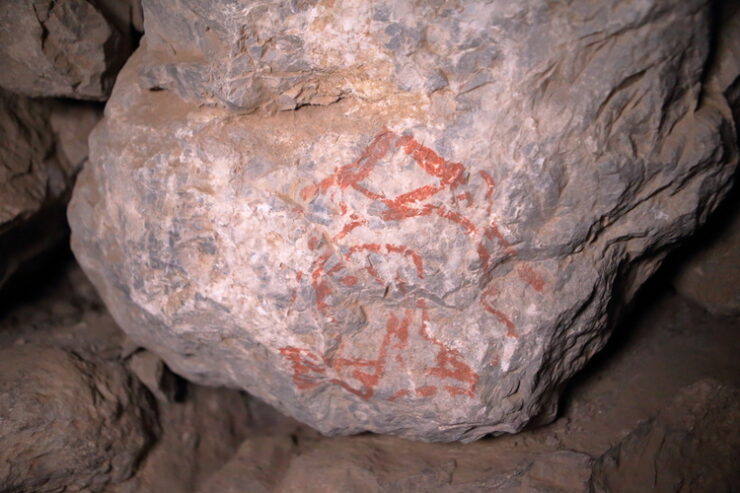 It is aimed to reach new information about the traditions of the Hittite civilization with 249 new hieroglyphs (an ancient writing system) discovered in the Yerkapı Tunnel in Hattusa, the capital of the Hittites.

Archaeological excavations, which started in 1907 at the Hattusa Ruins in the Boğazkale district of Çorum, the capital of the Hittites, one of the first civilizations of Anatolia, continue under the direction of Prof. Dr. Andreas Schachner from the German Archaeological Institute.

During the excavations carried out by archaeologists, Hittologists and scientists from different fields of expertise from different countries and universities, new symbols, estimated to have been drawn about 3,500 years ago, were found in the 80-meter-long Yerkapı Tunnel, which was built using thousands of stones.

Mardin Artuklu University Archeology Department lecturer Assoc. Prof. Bülent Genç, who is one of the excavation team, noticed the symbols that were presumably drawn with madder (dyes obtained from plant roots) on the stones in the middle of the Yerkapı Tunnel while he was walking around the ruins to take photos with the students on August 13.

Bülent Genç, who identified 249 symbols in the tunnel, shared his discovery with the excavation head, Schachner. Schachner also brought the hieroglyphs to the scientific world by having the Yerkapı and symbols scanned in 3D.

It is estimated that the icons have survived for thousands of years, undisturbed, due to the tunnel’s average temperature in all seasons and its location in a dark environment without sun and rain.

Work started on what meanings the symbols have. Schachner told AA that 249 hieroglyphs, which are thought to describe deities, continue to be studied by scientists from different fields.

He said that the archaeological excavations in Hattusha started in Yerkapı in 1907, and that everyone who has excavated, including himself, has passed through the tunnel dozens of times, but no one noticed the hieroglyphs. Schachner stated that Hittitologist Assoc. Dr. Metin Alparslan from Istanbul University started working to determine what meanings the symbols might have.

Emphasizing that the Yerkapı Tunnel, located at the top of Hattusha, was extremely important to the Hittites, Schachner believes that they will have the opportunity to better understand what the tunnel was used for with the newly found hieroglyphs.

He pointed out that the hieroglyphs in the tunnel were similar. “When we share the symbols with the world of science, our colleagues working on the Hittites will have an opinion, and maybe one or maybe a few ideas will emerge accordingly. We have determined a total of 249 Anatolian hieroglyphs here, but they are not all different from each other. We can divide them into 8 groups in total. Since they are written with paint, we need to interpret them more in a graffiti style. We think they were done quickly.” said.

Most of the hieroglyphs found in Anatolia have their own meanings and appear on monumental inscriptions or seals. Schachner said that the discovery of the symbols in the tunnel led to the idea that hieroglyphics were used much more widely in the Hittite period.

“We know the Hittites mostly from the cuneiform texts, but we see that the Hittites and Hittite culture also have a different and unique writing system for Anatolia. The interesting thing is that after the Hittite state collapsed, the cuneiform was lost, but Anatolian hieroglyphs continue to be used. We see that such inscriptions were used for another 400 years, especially in Southeast Anatolia, during the Iron Age period, that is, in the times following the Hittites.”