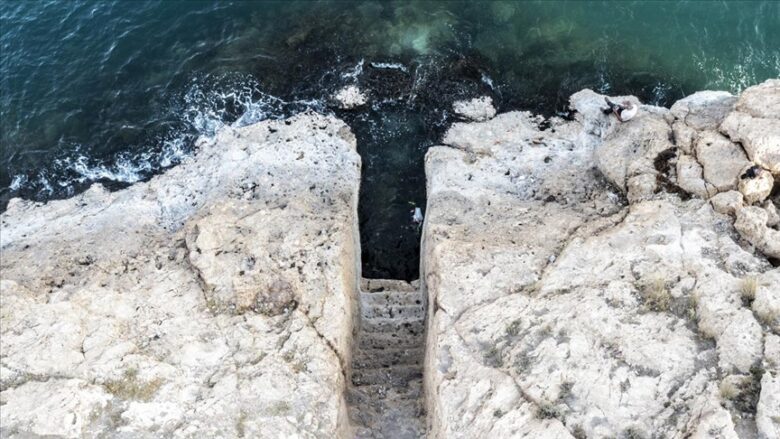 Due to the increase in temperatures, there has been a recent retreat in the coastal areas of Lake Van, where the water level changes periodically due to the effect of weather conditions.

Many structures and boats had emerged before due to the retreats. This time, the 11-step port of that period became visible on the coastal part of the castle, which was used by the Urartians for maritime transport.

Provincial Culture and Tourism Director Erol Uslu, Van Yüzüncü Yıl University Faculty of Letters Head of Archeology Department Prof. Dr. Rafet Çavuşoğlu, Van Museum officials examined the area, which was opened to a width of 3 meters and was used to transport materials to the castle during the Urartian period.

Çavuşoğlu told AA that the port is located on the outskirts of the registered castle called “Messrs Castle”. He said that the Urartians actively used Lake Van. “The important point here is that we see that a section has been opened for the easier unloading of heavy cargo used in maritime transport and for the boat to stand more comfortably. We know that the Urartians built castles both to the south and west. Most of these castles are on the edge of Lake Van. The castles of Ayanis and Kef are one of them. We see that the Urartians attach importance to sea transportation in order to provide transportation between the castles during the long winter months.”

He explained that the natural coves served as harbors for the Urartians, but that no remains of them have been found so far.

“As the waters of Lake Van receded, an area where the boat could approach and be fixed emerged. This is the first time we have encountered such a structure. It is an important thing for us. It shows that the waters of Lake Van were a little higher in the Urartian period because the protrusion point just below it was not opened. It opens towards the lake by forming rectangular steps on the rock to the left and right.”

Recently, this Urartian port was viewed from underwater. Diving instructor Serkan Ök and his team dived in the area.

Serkan Ök, Furkan Aşga and Selahattin Ulubey, from the underwater research team working in the region under the leadership of underwater cinematographer Tahsin Ceylan, dived to record the historical structure. In the dive, they determined that the stairs did not continue under water, and sacks full of soil were seen under the water.

Stating that they came across heaps of excavations around the port, Ök said:

“When we dived into the water, the first thing that caught our attention was the soil stuffed into the sacks. There are 30-40 sacks. Most likely, treasure hunters excavated in the area where the harbor is located, and they threw the unearthed soil and rock pieces into the lake. There is a hole in the mouth of the harbor. We viewed all the soil and stones under the water. We have dived to a depth of 15 meters in the area where the port is. We did not find the continuation of the ladder under the water.