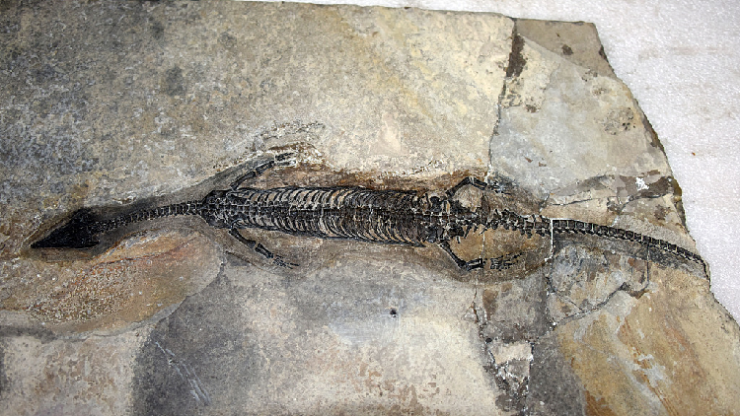 In Luoping County, Yunnan Province in southwest China, paleontologists found the fossil of a new marine reptile species that dates back 244 million years.

The species is a type of marine reptile known as Luopingosaurus. It is referred to as a Pachypleurosaur and has a mouth that is more than half a meter long and pointed.

According to Shang Qinghua, a researcher from the Institute of Vertebrate Paleontology and Paleoanthropology under the Chinese Academy of Sciences, the reptile’s long snout, accounting for over half of its head, facilitated the reptile to catch prey as it could largely reduce resistance during chases in the water. Additionally the discovery provided new insights into the early evolution of pachypleurosaur, Shang said.

The study found that the reptile had many phalanges on its forelegs, which gave its flippers greater flexibility while changing direction in the water. The discovery represents the earliest example of multiple-phalanged Sauropterygia in fossil form.

Luoping was in a shallow marine environment during the Triassic period, and the Luoping Biota is a middle Triassic fossil bank discovered in the area. The Luoping Biota, which was once home to invertebrates, fish, and a variety of marine reptiles, provides a new and early window on the recovery and radiation of Triassic marine ecosystems around 10 million years after the Permian extinction.

(The worst extinction event to ever affect life on Earth (252-201 million years ago) marked the start of the Triassic Period. One of the most important catastrophes in the history of our planet was the Permian-Triassic extinction event, sometimes referred to as the Great Dying, which occurred about 252 million years ago. It represents the divide between the Palaeozoic and the Mesozoic Eras.  It is still unclear what caused the Permian-Triassic extinction event. Many hypotheses have been put out, including an unidentified asteroid impact, large-scale volcanic eruptions in what is now Siberia, the release of methane from the ocean’s depths, sea level change, rising aridity, or a combination of many of these.)

As CGTN reported, Keichousaurus, a pachypleurosaur unearthed in 1957, was the first named marine reptile to be found in China.