Ancient Hebrew coin from the Jewish uprising against Rome discovered 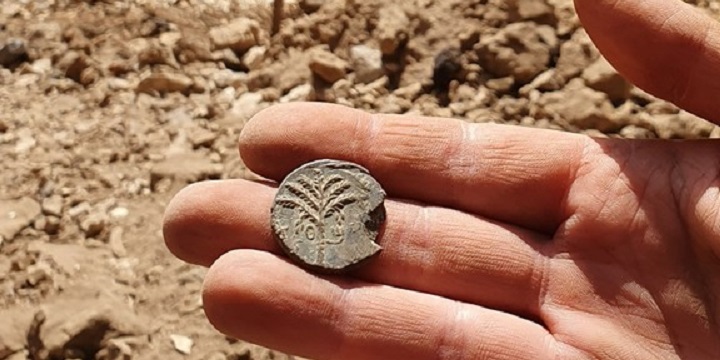 The Israel Antiquities Authority recently reported that during the excavation of caverns near the Dead Sea, an ancient Hebrew coin produced during Jewish uprising against Roman control in Judea was discovered.

The Nahal Darga Nature Reserve is where the bronze Hebrew coin was discovered. It is believed to have occurred during the second year of the Bar Kokhba rebellion, a Jewish insurrection against Roman control that started in Judea in 132 CE as a result of Roman repression of Jews. The Jewish population was extensively killed and reduced to servitude by the end of the insurrection, which lasted until 135 CE. The Jews were also driven from Jerusalem and the province of Judea was renamed Syria Palaestina.

According to the news of The Algemeiner, the image of a date palm on one side of the coin appears to be a reference to Shimon Bar Kokhba, the leader of the insurrection that bears his name. The obverse shows the palm tree and the inscription “Shimon”. The text “Year Two of the Freedom of Israel” is surrounded by a vine leaf on the reverse side.

According to the IAA, these coins were produced by Jewish officials during the uprising as a show of defiance against Roman control and to bolster morale. The basic materials were Roman coins.

Amir Ganor who is the director of IAA’s excavation said that: “This coin is not the only discovery attributed to the Jewish rebels that were retrieved in the current excavation. Remains of unique textiles and fabrics in various colors were also found.”

Earlier excavations in the Nahal Darga caves produced more relics. Papyri from Bar Kokhba’s Jewish government were discovered in 1951 at Murabba’at Cave II. IAA said that: “Additional excavations at the site may reveal whether this cave served as Bar Kokhba’s headquarters during the revolt that centered on the area of the Judean Desert.”