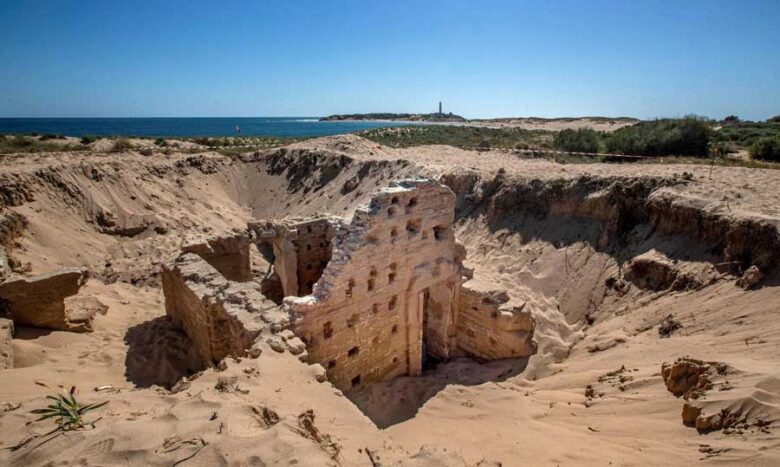 Archaeologists have discovered Roman artifacts, including a Bronze Age tomb, a Roman fish farm, among the sands of Andalusia.

Enormous, white, desert-like sand dunes, where artifacts have been unearthed, some reaching heights of 20 meters and widths of 300 meters. Admiral Nelson’s victory over Napoleon’s fleet in 1805, which guaranteed British naval might for 100 years and put an end to the threat of a French invasion of Britain, has made Cape Trafalgar legendary for more than 200 years.

Now, however, this region of Andalusia in Spain has become the site of findings that will associate it with a much older era of history thanks to the dunes. An ancient Roman fish farm, a salting facility, and a 3,500-year-old Bronze Age tomb have all been discovered by archaeologists. These significant historical discoveries were only made possible by the enormous sand dunes created by the fierce Levante wind.

Prof. Dario Bernal Casasola of the Cadiz University, who headed the investigating team, “At first these abandoned buildings deteriorated because of the salt in the sand and air but after being covered by sand they were sealed with a protective cover over them,” said to i news. “Trafalgar has, until now, been famous for the battle but now it will also be known for these discoveries from thousands of years ago.”

The Bronze Age tomb is the best-preserved burial site from this era yet unearthed in Spain. At least seven skeletons that were decked with gold and silver jewelry, a bone comb, and a beaded necklace were discovered by researchers. One of them included an adult woman’s skeleton. “These people must have been important or had an element of prestige. What seems to have happened is the tomb would have been dug up over time and other people’s remains added to it,” said Prof. Casasola.

A Roman fish farm is the first one to be discovered in Iberia. The first fish farm found in Iberia was a Roman one. As far as we know, there is a salting facility from the Roman era right next to it, where fish was preserved in an era before refrigerators. Red tuna and other foods were prepared in the salting pools. Garum, a fermented sauce produced from fish guts and herbs, would have also been prepared by cooks.

Researchers also discovered the remnants of a Roman bath complex called a thermae less than a mile along the coast in Los Caos de Meca. The 13 foot tall structure, which was covered in marble and red, white, and black stucco decorations, was only five feet below the surface. Romans could take use of ceremonial, hot bathing thanks to the double-walled edifice, which covers an area of 2.5 acres. Roman bathing, exercise, and leisure habits have been preserved for nearly two thousand years under the sand.

Invading Iberia in the second century BC, the Romans finally incorporated Spain into their Empire. Throughout Spain, ancient Roman artifacts have been found from time to time, some of which have appeared in the most unexpected locations. Authorities conducting an examination of a vendor of frozen seafood in the southern Spanish city of Alicante in 2020 found 13 Roman amphorae among the vendor’s merchandise. The ancient Romans might have used these clay pots to transport oil, wine, or garum across the Mediterranean, according to Spain’s Civil Guard at the time. In Tomares, close to Seville, construction workers installing water pipes in 2016 discovered 600 kg of old Roman bronze coins from the third and fourth century inside 19 Roman amphoras. Experts deemed this find to be extraordinarily unusual.

As a result, the region is a place where ancient discoveries are made very often. The close explorations began last year after the Andalusian regional government asked them to investigate early fishing communities in southern Spain.

Archaeologist who was part of the team, Juan José Daz said the Levante wind played a crucial role in the discoveries.