Ruins of an 800 year old royal temple discover in Beijing 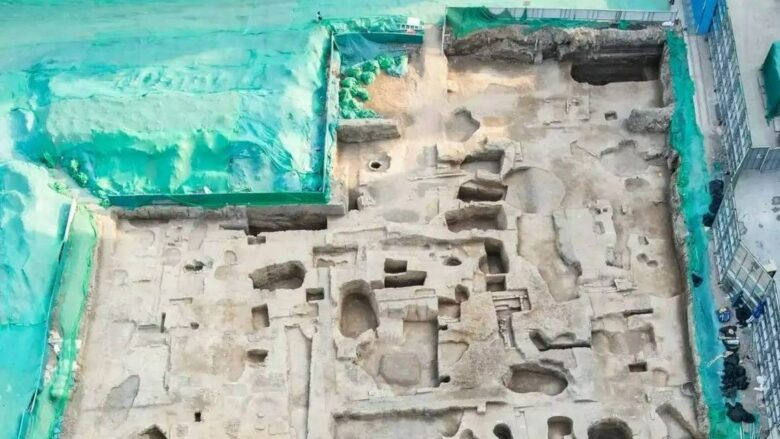 In advance of restorations, archaeologists started digging the Guangyuanli site in Jinzhong City, central Beijing, according to a news from the The Kansas City Star.

Archaeologists discovered the ruins of five houses organized around a central courtyard after excavating an area of around 183,000 square feet. Wells, stoves, and ash pits dot the complex, and road remnants connect the structures.

Archaeologists claimed that ancient structures from the Liao period were built on top of the complex. The Liao dynasty lasted from 900 to 1100 AD. (In Chinese history, the nomadic Khitan tribes created the Liao dynasty (907–1125) in a large portion of what is now Manchuria and the Inner Mongolia Autonomous Region of China.)

In the region, the largest destroyed structure has a three room floor layout and is roughly 72 feet long and 65 feet broad. The building’s scale is comparable to royal structures discovered at other Chinese archaeological sites.

The complex had a wealth of items, which archaeologists discovered. Researchers matched the damaged complex with descriptions of Dajue Temple, a temple utilized in the later Jin Dynasty, using these relics and historical data. And the later Jin Dynasty lasted from from 1100 to 1200 AD. (Tungus Juchen (or Jurchen) tribes of Manchuria formed the Jin dynasty, which ruled an empire.)

During excavations at the 800 year old temple, glazed tiles with patterns of dragons, phoenixes, and other animals, as well as copper seals, were discovered. In Chinese mythology, folklore, and Chinese culture in general, the dragon is a legendary creature. Chinese dragons can take on a variety of animal forms, including turtles and fish, although they are most frequently seen as snake-like creatures with four legs.

Jade books, dragon tiles, and phoenix patterns were among the artifacts that were frequently associated with the royal family. The artifacts show that the location probably had ties to the aristocracy.

Other relics attested to the site’s religious significance. Archaeologists discovered a statue of a bodhisattvas, a person on the Buddhist path to enlightenment, and a statue of figures known as the heavenly kings. Other pottery sculptures show unidentified figures, Additionally, numerous porcelain varieties were found.

According to historians, it was customary to temporarily enshrine the emperor and empress in a temple during the latter Jin Dynasty before officially greeting them. They believe that this event most likely took place at the Guangyuanli site based on the royal and religious artifacts that the researchers discovered.

Archaeologists also discovered the remains of a dried-up watercourse towards one end of the complex of royal temples. On the riverbed, bundles of sticks were still visible. The water was littered with porcelain pieces, copper coins, and bronze mirrors with fish motifs.

Researchers identified the river ruins as the Nannan Moat of Liaoning. Before the remaining portion of the long-gone river snaked beneath present-day roads and structures, archaeologists could only unearth a small portion of it.